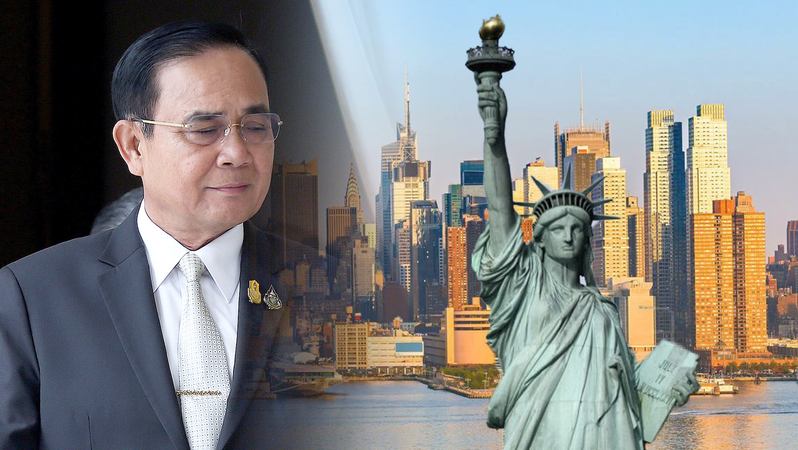 Prime Minister General Prayut Chan-o-cha and his entourage will leave for New York to attend the 74th United Nations General Assembly on Saturday.

The trip to the US from Saturday to next Friday will also be attended by Foreign Minister Don Pramudwinai and Natural Resources and Environment Minister Varawut Silpa-archa.

According to a schedule released to the media, Prayut will also attend two meetings in his capacity as this year’s chairman of Asean to represent ‘s Asean and Thailand’s roles in the international arena as well as to protect Thailand’s interests.

He will attend a high-level meeting on Universal Health Coverage to show Thailand’s strong role in public health affairs. During the meeting, the prime minister will make a speech to show to the international community that Thailand has interwoven public health service with social and economic developments and pushed for universal healthcare. The prime minister will also emphasise Thailand’s push to put universal healthcare on the world agenda.

Prayut will also attend the UN Climate Action summit and the Sustainable Development Goal summit. The prime minister will deliver a speech at the SDB summit on behalf of Asean. He is expected to say that Asean will accelerate development of the region and emphasise the role of local people as the centre of development projects based on the “sufficiency economy” philosophy, and that Asean would cooperate with the US and other nations in implementing development projects.

Prayut is also scheduled to meet the Asia Society and the US-Asean Business Council (USABC).

The Thai prime minister will assure the Asia Society that Thailand would cooperate with various countries on security, economic, social and environment projects, while the Kingdom also prepared to transform itself into an aged society and to develop smart cities and get its human resources ready for digital disruption.

During the meeting with the USABC, the prime minister will update the council of Thailand’s economic reforms, especially customs reforms that would benefit business operations. The prime minister is to emphasize the strong points of the Eastern Economic Corridor project.

Prayut and his entourage are scheduled to fly from Suvarnabhumi Airport at 11.10pm on Saturday and to reach the John F Kennedy International Airport in New York at 11.05am on Sunday.

The prime minister will be briefed about his US mission and other activities in the afternoon as well as meet the community of Thai expats in New York at 3.30pm.

On Monday, Prayut will attend a high-level meeting on Universal Health Coverage as well as attend a summit on climate change.

On Tuesday, Prayut will attend a 9am banquette host by the UN secretary general for national leaders and their spouses.

In the afternoon, he will attend the SDG Summit, as well as an evening banquette held by the US president and first lady for foreign leaders and spouses.

On Wednesday, Prayut will deliver a speech to the Asia Society at noon and attend a dinner meeting with executives of the USABC at night.

The prime minister and his entourage are scheduled to fly from New York at noon on Thursday, landing at Suvarnabhumi Airport at 9.55pm on Friday.