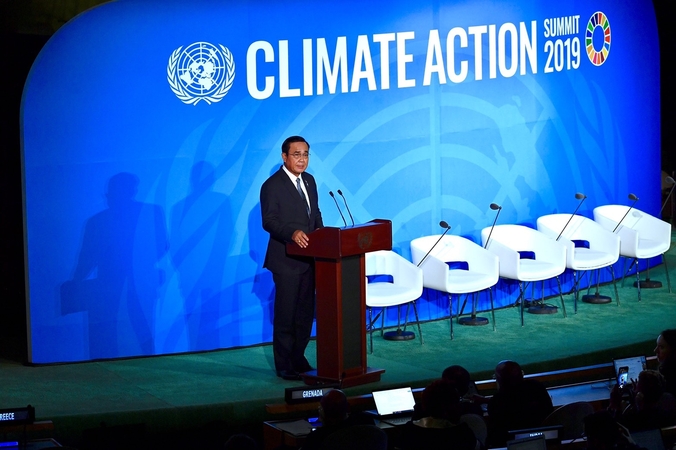 Prime Minister of the Kingdom of Thailand,

on behalf of the ASEAN Member States,

Mr. President of the General Assembly,

I have the honor to deliver this statement on behalf of the ten ASEAN Member States.

1. ASEAN welcomes the convening of the Climate Action Summit today and commends the Secretary-General for his leadership in addressing the climate change issue continuously.

3. ASEAN is committed to be actively involved in global climate action at various levels.

At the global level, ASEAN strongly supports efforts under the United Nations Framework Convention on Climate Change. All ASEAN Member States are Parties to the Paris Agreement and have communicated their Nationally Determined Contributions (NDCs).

At the regional level, ASEAN has been implementing strategic measures under the ASEAN Socio-Cultural Community Blueprint 2025 in order to move towards “Sustainable Climate” and to realize a resilient community. ASEAN has key targets which include

(1) Targets on energy transition ASEAN has exceeded its energy efficiency target, reducing energy intensity by more than 21.9% compared to 2005 levels, well ahead of its 2020 target. ASEAN will continue to work towards the long-term target to reduce energy intensity by 30% by 2025 and have also set a target to increase the component of renewable energy mix by 23% by 2025.

(2) Targets on land transport ASEAN aims to reduce the average fuel consumption of new light-duty vehicles sold in ASEAN by 26% between 2015 and 2025. ASEAN will also introduce and strengthen fiscal policy measures based on fuel economy or on CO2 emissions at national level; and promote the adoption of national fuel consumption standards for light-duty vehicles, striving towards a regional standard in the long term.

4. ASEAN stresses the direct linkage between climate action and all means of implementation, including capacity-building, transfer of technology and financial support. Today is an opportunity for developed countries to deliver on their financial commitments, and we also hope to see their strong political signals to scale-up climate finance that is secure, predictable and sustainable in the post-2020 context.

5. The IPCC special report warned us that we have less time to avoid potentially irreversible climate disruption. No one country can fight climate change alone, therefore partnership is vital.

6. ASEAN stands ready to advance our partnership with the global community on climate action to ensure sustainability for present and future generations.