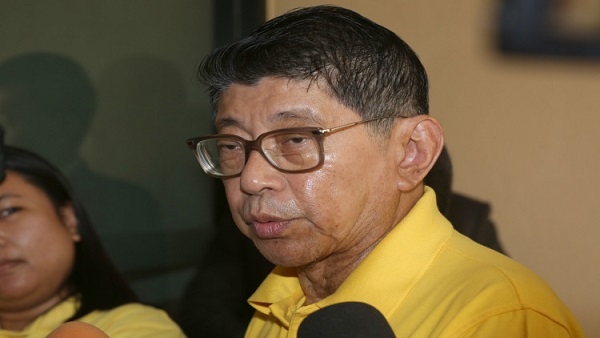 Deputy Prime Minister Wissanu Krea-ngam said on Thursday that Nawat Tocharoensuk’s murder conviction this week clearly disqualified him from serving as a member of Parliament.

Nawat, a Pheu Thai Party MP for Khon Kaen, was sentenced to death on Tuesday for his role in the 2013 murder of Suchart Kotthum, chief administrator of the Khon Kaen Provincial Administrative Organisation. Nawat is in detention pending appeal, declined bail because the severity of the sentence makes him a possible flight risk.

Wissanu’s comment to reporters at Government House came after Chuan Leekpai, speaker of the House of Representatives, said the Election Commission would have to ask the Constitutional Court to consider Nawat’s MP status.

“It is normal that, when there is a dispute, someone must make a final decision,” Wissanu said while offering his personal view that Nawat must relinquish his MP’s post according to Section 98 of the Constitution.

It states that MPs ordered detained by the court must relinquish their office, regardless of the charge or whether their case has been finalised.

The Constitutional Court’s decision would simply confirm the standard, after which a by-election would be organised to replace Nawat, Wissanu said.

Suchart was shot dead in front of his home in Muang Khon Kaen on May 3, 2013. Five suspects were subsequently charged with colluding in a premeditated murder and violating the Firearms Act.

The Appeals Court in 2016 imposed the death sentence on Somjit, ordered Prapan jailed for life, and overturned the three acquittals in favour of life sentences. All five men are appealing to the Supreme Court.

The Khon Kaen Court issued a warrant on April 3, 2018, for Nawat’s arrest for hiring others to commit murder, which led to his death sentence this week.