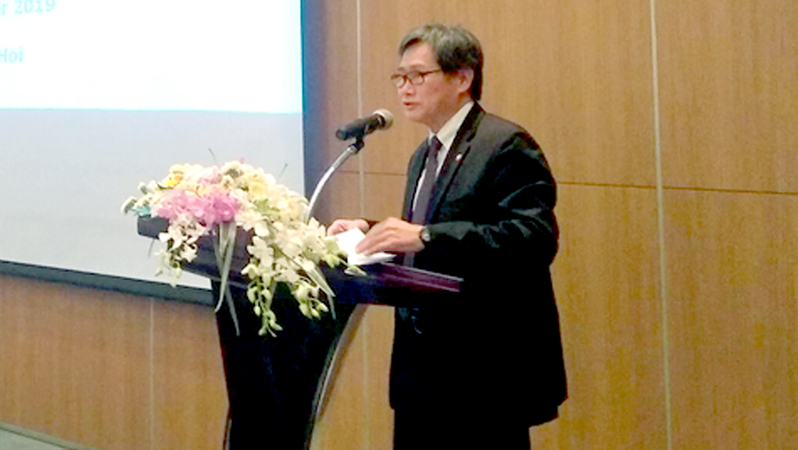 ASEAN Secretary-General Lim Jock Hoi speaking at the ERIA editors roundtable in Bangkok on Sunday. He said the ASEAN Secretariat will not moving to Kalimantan despite the Indonesian government's plan to relocate its capital there. (The Jakarta Post /Dian Septiari)

Although Indonesia is planning to move its capital from Jakarta to Kalimantan, the ASEAN headquarters would remain in Jakarta, ASEAN Secretary-General Lim Jock Hoi has said, likening the city to New York, where the United Nations is seated.

“This is news for all of us that [Indonesia] will be moving the capital to Kalimantan, but as far as ASEAN is concerned the ASEAN Secretariat will not move to Kalimantan because we just got a new building,” he said at the Economic Research Institute for ASEAN and East Asia’s (ERIA) editors' roundtable in Bangkok on Sunday.

“And we believe that Jakarta will be the capital of ASEAN.”

The plan to move the capital city off Java was first revealed by National Development Planning Agency (Bappenas) head Bambang Brodjonegoro in April. The new capital is to act as the center of government, while Jakarta would remain the country's business and economic center.

In late August, President Joko "Jokowi" Widodo officially announced that two regencies in East Kalimantan -- North Penajam Paser and Kutai Kertanegara -- are to be the site of the country's new capital city. The relocation is intended to help ensure the equal spread of development across the country and to take some of the burden off Jakarta.

The announcement came about two weeks after Jokowi inaugurated the new building for the ASEAN Secretariat in Jakarta. The event was held on ASEAN Day, which falls every Aug. 8 to commemorate the establishment of ASEAN by its five founding members in 1967.

Funded by Indonesia, the new ASEAN Secretariat building is located next to its previous building in South Jakarta and has two 16-floor towers. It cost about Rp 500 billion (US$37.3 million) to build. Construction started in 2018, a year after the Jakarta administration granted the Foreign Ministry the 1.3-hectare plot of land on Jl. Trunojoyo in South Jakarta, right next to the old building. The new building is equipped with 30 meeting rooms and each ASEAN member country has its own room.

“We would like to see this like what we have in New York where the United Nations [is seated] and the ASEAN Secretariat will be the anchor for the ASEAN capital in Jakarta,” Lim said.

With 93 ambassadors accredited to ASEAN, 74 of them based in Jakarta, Lim said ASEAN was adamant that its headquarters would remain in Jakarta, which since 2012 has been affirmed as the diplomatic capital of ASEAN.

”It is possible because we will strengthen our presence in Jakarta and there's no way that we can move to Kalimantan,” Lim said.