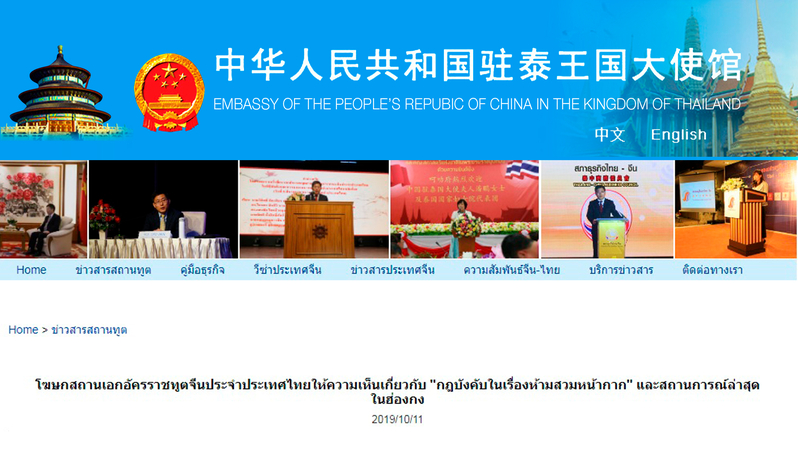 The Chinese Embassy in Bangkok issued a statement in Thai on Thursday (October 10) lashing out at unspecified Thai politicians for appearing to take sides in the Hong Kong upheaval.

The embassy sent an English-language version to The Nation on Friday which reads in part: “Some politicians from Thailand even met with the [pro-democracy] activists. This act, which boosted the arrogance of the activists, is extremely wrong and irresponsible.

“The Chinese side hopes that the relevant persons can see through the nature of the issue, be discreet in word and deed, and work more for the friendship between China and Thailand.” (See full text below.)

The statement seeks to explain the Hong Kong government’s ban on the wearing of masks as a means of discouraging the street protests that have roiled the special administrative region for months. Protests continue, however, with many demonstrators still disguising their identities behind masks.

Beijing has accused European and American entities among other foreign organisations and individuals for interfering in China’s internal affairs by expressing support for the protesters.

The full statement from the Chinese Embassy:

“On October 4, the Hong Kong SAR government announced the enactment of the Prohibition on Face Covering Regulation in accordance with the Emergency Regulations Ordinance, as well as the commencement of the regulation on October 5. According to the regulation, the use of facial covering in public meetings and processions for the purpose of preventing identification by the police is banned. Violation will be regarded as offence.

“They maliciously committed bloody incidents, ramped up violence, posed a severe challenge to the rule of law, sabotaged the tranquility in Hong Kong, and threatened the security of the police and the public.

“The gravest danger in Hong Kong is that the violence is rampant, and the rule of law cannot be fully executed. It has come to a critical stage where a clearer attitude and more effective measures have to be adopted to cease the violence. Under such circumstances, it is lawful, justified, reasonable and extremely necessary for the SAR government to enact the Prohibition on Face Covering Regulation.

“A lot of countries and regions around the world have similar laws, and the prohibition will have no impact on the lawful rights and freedom to which Hong Kong citizens are entitled, including the freedom of processions and assembly.

“The Chinese central government firmly supports all the necessary measures taken by Chief Executive Carrie Lam, the SAR government, the police force and the judicial authorities in accordance with the law to punish violent offenders, especially the hardcore violent offenders, as well as the planners, organisers and directors behind the scenes.

“It must be pointed out that the nature of the protests has totally changed and evolved into a ‘colour revolution’ with the interference of external forces. Under the cloak of pro-democracy and freedom, the ‘Hong Kong independence’ activists are sabotaging the basic principle of One Country, Two Systems, and undermining the sovereignty and territorial integrity of China. The Chinese side is resolutely opposed to that.

“These activists are also colluding with external forces to spread rumours and confuse right and wrong, for the purpose of realising their hidden agendas. Some politicians from Thailand even met with the activists. This act, which boosted the arrogance of the activists, is extremely wrong and irresponsible. The Chinese side hopes that the relevant persons can see through the nature of the issue, be discreet in word and deed, and work more for the friendship between China and Thailand.”