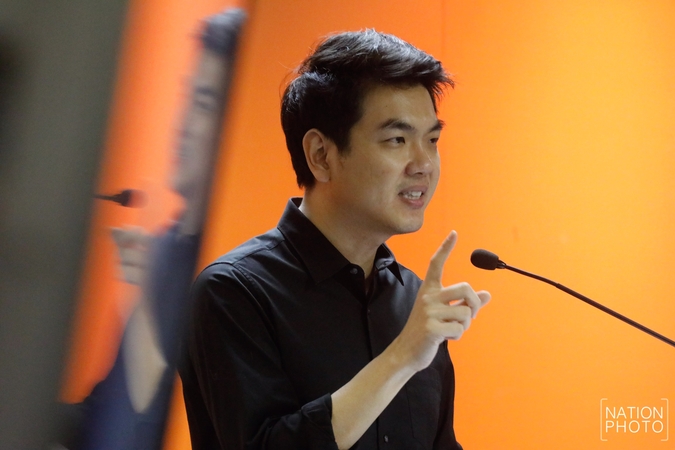 Future Forward Party secretary-general Piyabutr Saengkanokkul on Saturday (October 12) said that the remarks of Army chief General Apirat Kongsompong on politicians, academics and national security could deepen the divide in the country and spark a clash of generations.

Piyabutr made the remarks at a seminar on Saturday when he spoke on “homeland from the democratic perspective and the role of the people in building the nation”. The seminar was held in response to Apirat’s special seminar on Friday on Thailand’s national security.

During his speech, Apirat had warned that the threat to Thailand from communists was not over. Some former communists had become politicians, and some had become academics but the “communist ideology chips  were still implanted in their heads”, he said.

Apirat also cited threats from information warfare and propaganda and the spread of fake news, which he saw as a collaboration between former communists or foreign-graduated leftists and unethical scholars.

In his speech Piyabutr said that to build the nation, respect for difference of opinion, human dignity, rights and liberty must be promoted and enshrined. National security is equal to people security, he said.

Piyabutr disagreed with the Army chief's argument that Section 1 of the Constitution could not be amended as that could affect national security.

Section 1 states that Thailand is one indivisible Kingdom.

On Friday, Apirat had voiced strong opposition to proposals to amend the Constitution’s Section 1.

Apirat’s comments were in response to a campaign launched by Opposition leaders, academics and civil groups to amend the junta-sponsored charter, which they say is undemocratic.

Apirat said the proposal to amend Section 1 would adversely affect other sections, especially the one on the monarchy.

Piyabutr said that the section could be amended but the amendment must not lead to the change of the current regime of constitutional monarchy with the King as the head of state.

He cited Section 255 of the 2017 Constitution, which bans the amendment of the charter that will lead to a change in a democratic regime with the King as the head of the state.

He added that the Opposition had mentioned many times that it wanted to see the creation of a new charter written by a new charter drafting assembly elected by the people. The Opposition also will not touch Chapters 1 and 2 of the charter.