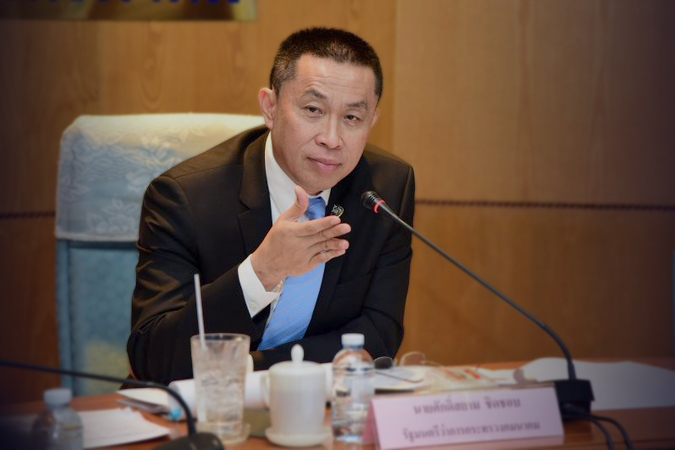 Transport Minister Saksyam Chidchob said on Tuesday (October 15) that board members of the State Railway of Thailand (SRT) will today consider filing a civil case against Hopewell (Thailand) Co Ltd after the committee examining the Hopewell case chaired by Pisak Jitwiriyawasin, deputy permanent secretary at the ministry, discovered that the Hopewell elevated highway and rail line project could have violated the law regarding foreign companies.

“The law requires that foreign companies conducting business in Thailand must be qualified according to the Announcement of the National Executive Council No. 281 and must be approved by the Cabinet, which Hopewell wasn’t,” he said. “We are looking to file a civil case not because we are hoping to get compensation, but to have the contract revoked once the court rules that Hopewell was not qualified to conduct business in the Kingdom.”

The Minister also added that the Department of Special Investigation (DSI) has taken on the SRT versus Hopewell case filed earlier at the Supreme Administrative Court as a special case. “The DSI will later look into the possibility to file criminal charges against Hopewell,” said Saksyam.

Earlier the Supreme Administrative Court had ruled that SRT had breached the contract and must pay Bt11.8 billion compensation to Hopewell together with 7.5 per cent interest annually within 180 days of the ruling date. The deadline for payment is this Saturday (October 19). The Deputy Prime Minister for legal affairs Wissanu Krua-ngam will be responsible for the payment procedures.