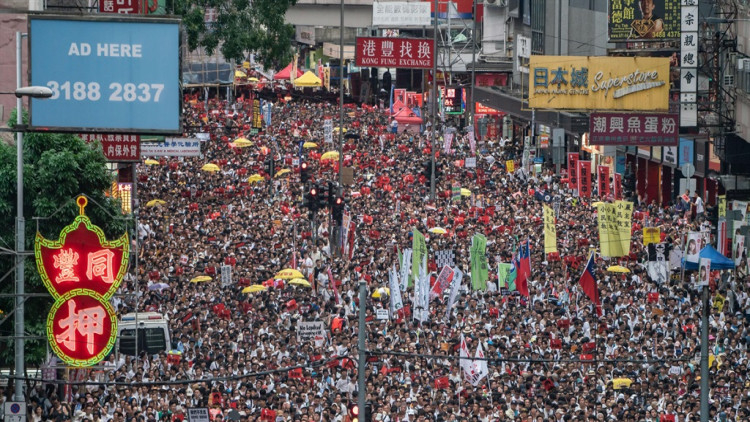 Hong Kong - Chinese authorities reacted angrily to the US House of Representatives’ passage of a bill that paves the way for economic sanctions against individuals who undermine Hong Kong’s autonomy, as the city braced for fresh unrest and some lawmakers disrupted a much-anticipated policy speech by its embattled leader.

The Hong Kong Human Rights and Democracy Act, approved unanimously by the House on Tuesday, requires the US government to consider annually whether it should continue to treat Hong Kong as a separate trading entity from mainland China in response to political developments in the city. That special status has allowed Hong Kong to cement its role as an international financial centre and exempts its goods and services from the Trump administration's tariffs.

China promised Hong Kong a high degree of autonomy until 2047 ‒ a half-century after its handover from British rule, under a “one country, two systems” principle ‒ but Beijing has been tightening its grip. Activists say the ruling Communist Party has gradually chipped away at the rights enjoyed by the people of Hong Kong that do not exist in mainland China, such as an independent judiciary and freedom of assembly.

After months of clashes between pro-democracy protesters and riot police in Hong Kong sparked by now-shelved plans to allow extraditions to the mainland, the city’s government invoked emergency powers this month to ban masks at protests, expanding a crackdown on demonstrators. The intensifying crackdown prompted US lawmakers to propose the bill, which must get a green light from the Senate and White House before it becomes law.

“The extraordinary outpouring of courage from the people of Hong Kong stands in stark contrast to a cowardly government that refuses to respect the rule of law or live up to the ‘one country, two systems’ framework, which was guaranteed more than two decades ago,” House Speaker Democrat Nancy Pelosi said Tuesday.

He said the bill demonstrated a “naked double standard, which fully exposes the extreme hypocrisy of some people in the US on the issues of human rights and democracy and their sinister intentions to undermine Hong Kong’s prosperity and stability and contain China’s development”.

“It fully exposes the political plot of the US House of Representatives and some politicians to use Hong Kong as a card to contain and restrain China’s development,” he said.

For Hong Kong, which is tipping towards recession, the bill could lead to severe economic consequences. An end to the city’s special trading relationship with the United States would erode the territory’s advantages as a Western-friendly business hub and a regional base for numerous multinational firms.

The United States is Hong Kong’s second-largest trading partner, with estimated two-way trade of $69 billion (Bt2.1 trillion) in 2017. It is also the second-largest destination for Hong Kong exports, which amounted to $42 billion.

Other measures passed in the House on Tuesday would prohibit US exports of military and crowd-control items used by Hong Kong police.

Hong Kong’s government issued a lengthy statement detailing the ways it abides by the “one country, two systems” framework.

“Safeguarding human rights and freedoms is a constitutional duty of the [Hong Kong] government,” the statement said, adding that police have been acting with “restraint” and “been carrying out enforcement actions in strict accordance with the law”.

A government spokesman added that “foreign legislatures should not interfere in any form in the internal affairs” of Hong Kong.

Minutes into her appearance at the legislative chambers, pro-democracy lawmakers heckled Lam and forced her to suspend her speech. Some held signs saying “Five Demands, Not One Less”, a reference to protesters’ demands, with an image of a smiling Lam featuring bloodied hands.