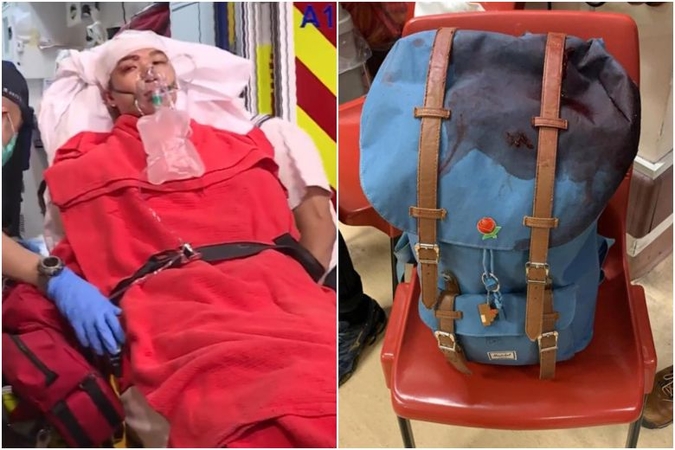 Mr Jimmy Sham was bleeding from the head but was conscious when seeking treatment at the hospital. (Right) His stained backpack after the attack on Oct 16, 2019. PHOTOS: TANYA CHAN/FACEBOOK, SCREENGRAB FROM RTHK VNEWS/FACEBOOK

A prominent Hong Kong activist and convenor of the Civil Human Rights Front (CHRF), which has organised many of the city's largest peaceful protests, was assaulted on Wednesday evening (Oct 16), the group's spokesman said.

Mr Jimmy Sham was attacked by four to five men wielding hammers while on his way to a meeting in the Mong Kok area of Kowloon, CHRF spokesman Rayne Yuen said in a statement.

Mr Sham was bleeding from the head but was conscious when seeking treatment at the hospital. It is the second assault on him; he was also attacked in August.

"The Civil Human Rights Front strongly condemns the acts of the perpetrators," it said in a statement. "It is not hard to link this incident to a spreading political terror in order to threaten and inhibit the legitimate exercise of natural and legal rights."

A spokesman for the Hong Kong Police Public Relations Branch said it had received a report about a person who was attacked and injured in Mong Kok, and was investigating, but did not disclose the identity of the person.

Unrest in Hong Kong has been going on for more than four months, with the police force using tear gas, water cannons and rubber bullets to disperse crowds, while protesters lobbed Molotov cocktails and, this week, set off a home-made bomb.

Mr Sham, who is planning to join the district council elections in November, was attacked in August by two masked men with a baseball bat and knife. Prior to the latest incident, the CHRF had planned a protest this Sunday in Kowloon.