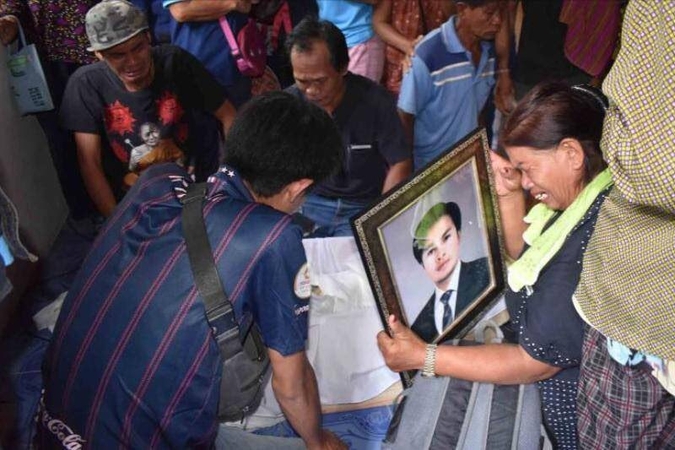 A funeral being held for a Thai man, who was found unconscious near his workplace after a crackdown by immigration officers, in Thailand, Oct. 3-4. (Gimhae Migrant Human Rights Center)

Activists say crackdown does little to help reduce the number of undocumented migrants.

Last month, a 29-year-old Thai man who was working in Korea illegally was found unconscious in the mountains near a factory in Gimhae, South Gyeongsang Province, after a crackdown by immigration authorities.  Video footage shows a gray van stopping in front of the factory. As officers get out of the van, migrant workers shout, “Officers are here for a crackdown,” and then scramble to escape.  The Thai man was found some 100 meters away from the factory and was transferred to a hospital, but died. The cause of his death was severe damage to his internal organs. With an investigation into his death still underway, he is believed to have died as he attempted to flee.  In the operation, eight unregistered migrants -- three from Thailand, four from China and one from Vietnam – were apprehended.   The tragic incident is only the latest case of migrants who were injured or even killed during crackdowns by immigration officers. Activists accuse the immigration authorities of abusing their authority and violating the undocumented migrants’ human rights.  More fundamentally, however, they say the country’s immigration policy, which they see as inducing a surge of undocumented migrants, must be fixed.  Crackdown on unregistered migrants Activists see the Thai man’s death as a result of excessive force. “When migrant workers are chased, they panic and start to run around in factories where machines are still running and there are many dangerous objects,” said Kim Kyung-mi, an interpreter who has helped four Chinese nationals captured during the crackdown. “Those caught along with the deceased Thai man were shaken by the crackdown as they feel they could have faced a similar situation. They said they were too afraid to leave their home for days,” said the activist from Gimhae Migrant Human Rights Center. “It is inhumane.”

The Justice Ministry says the officers followed the ministry protocol, saying it was reasonable law enforcement and unnecessary force was not used.  Under the Justice Ministry’s directive, immigration officers are required to gather information about unregistered migrants, make plans for a crackdown including safety measures, and visit the scene in advance. Upon arrival, they are required to show their identification cards to migrant workers’ employer and seek consent before conducting a raid. “There are many cases of immigration officers not following legal procedures -- such as failing to present their identification cards or seeking the consent of employers before carrying out crackdowns,” Shekh al-Mamun, a Bangladeshi official from the Seoul-Gyeonggi-Incheon Migrants’ Trade Union, said. “The crackdown process is dangerous as immigration officers treat unregistered migrant workers as criminals and chase them.” In 2018, Than Zaw Htay, a migrant from Myanmar who was 27, also fell and died at a construction site in Gimpo, Gyeonggi Province, while trying to escape a crackdown.  According to government data, seven people were killed and some 70 were injured during crackdowns over the past decade.  Under the Moon Jae-in administration, the Justice Ministry has stepped up crackdowns on unregistered migrant workers by partnering with other relevant bodies amid growing complaints that the migrants are “stealing jobs.”  The intensified crackdowns are necessary to discourage migrants from illegally staying in the country, the ministry’s official said in an email response to The Korea Herald, citing a sharp increase in their number. An estimated 380,000 migrants are staying in Korea without valid documents, according to the ministry’s data. In comparison, the figure stood at 208,971 in 2016. The ministry also pointed out public concerns over foreigners taking jobs, especially at construction sites. Turning a blind eye to the rise of undocumented migrants is also unfair to those who legally arrive and stay in the country, it said.  Kim Hyung-jin, head of the Gimhae Migrant Human Rights Center, called for stricter legal procedures regarding crackdowns -- such as making it mandatory to seek a warrant before raiding the workplaces. But the Justice Ministry is cautious about it.  “Crackdowns on foreigners illegally staying and living in Korea is an administrative procedure to address immigration law violations, so applying criminal law procedures -- such as seeking a warrant (to apprehend them) -- is not in line with the administrative purpose of catching and promptly deporting them,” the ministry said. Revisiting immigration policy  Such crackdowns, however, have done little to reduce the number of undocumented migrants. If anything, they appear to have pushed them to go into hiding, making them more vulnerable to human rights abuses.  “Currently, crackdowns take place only at some workplaces, meaning that the measures are not strong enough to send a warning to employers and foreign workers. It is just for show,” Cho Young-kwan, a lawyer for Migrants Center Friend. The Justice Ministry stresses the need to raise the number of personnel in conducting crackdowns on unauthorized migrants. At present, there are 1,461 unauthorized migrants for every officer.  To curb illegal immigration, the government should address the fundamental cause -- Korea’s short-sighted policy which activists say “produces” unregistered migrants -- rather than only focus on cracking down on them, he noted.  Korea opened its doors wider for foreigners during national events such as the 2018 PyeongChang Winter Olympics, and has eased visa requirements for tourists, most recently for those from Thailand and Kazakhstan. Most of the undocumented workers overstay their visas after arriving here legally on work or student visas, or remaining here after entering the country on a visa-free entry scheme, according to the ministry.  “Whether they arrive on a visa-free scheme or a student visa, they come to Korea to find work. There is also a demand for them as domestic employers seek cheap labor,” the lawyer Cho said. “This structure should be fixed to tackle the rise of foreigners without a legal status and to protect the labor market.” Korea has signed an agreement under the Employment Permit System with 16 countries in Southeast and Central Asia to fill low-skilled jobs in such sectors as manufacturing, fishing and agriculture, which are shunned by Koreans due to the low pay and poor working conditions. Still, the influx of foreign workers entering the country legally appears to fall short of meeting the demand of small manufacturers and farming sector, which creates opportunities for unregistered migrants.  Al-Mamun, the Bangladeshi official from the Seoul-Gyeonggi-Incheon Migrants’ Trade Union, said that the government should bring them within the legal framework.  “Unauthorized workers who have been in Korea for more than 15 years should be brought under the legal framework so that their skills and experiences can contribute to the economy. That’s what Korean employers want as well,” he said.