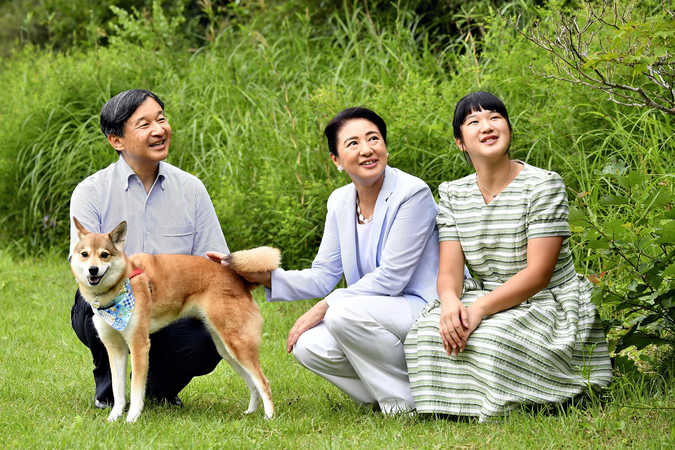 TOKYO - More than five months have passed since the Imperial household marked the beginning of the Reiwa era, in the wake of the Emperor succeeding his father to take the Imperial throne.

At the same time, some Imperial events that had been discontinued because of the age of the Emperor Emeritus have been revived.

Members of Crown Prince Akishino’s family have also attended various events at home and abroad to support the activities of the whole Imperial household.

Getting out and about

On Sept. 7, the Imperial couple visited an animal protection center in Akita, that mainly looks after abandoned dogs and cats.

The Emperor squatted down in front of some children and took a photo from his trouser pocket.

In the photo was Yuri, the beloved pet dog of the Emperor and his family that they keep at the Akasaka Imperial Residence.

The Emperor told the children, “[A dog] also lives at my house,” as the children curiously looked at the photo.

Since May, the Imperial couple has visited Aichi, Akita, Niigata and Ibaraki prefectures to attend the nation’s “four major regional events,” such as the National Arbor Day ceremony and the Festival for the Cherished Sea.

At each destination, the Imperial couple placed great importance on interacting with members of the public. When they traveled by car, they lowered the windows to wave at people along the roads, and they approached people who gathered at their destinations to converse with them.

The Emperor has revived some duties that had been discontinued to reduce the burdens on his father due to his age.

The Emperor delivered an address at each event for National Arbor Day, the Festival for the Cherished Sea and the National Sports Festival, the first time an emperor has done so for 11 years.

When French President Emmanuel Macron and his wife visited Japan as distinguished guests in an official working capacity in June, the Emperor held a luncheon following their official meeting at the Imperial Palace.

Luncheons with guests of this status had been suspended since 2016.

The Emperor has also been enthusiastic about carrying out the rituals of the Imperial Palace in which the Emperor prays to Shinto deities for peace and other benefits for the nation.

Some rituals had been conducted by the grand master of the division of rituals on behalf of the Emperor Emeritus when he was emperor, because of his age. The Emperor returned to the original form in which he himself conducts the rituals.

The style of imperial events is basically following those of the Heisei era. But there are changes in some areas.

One example is how social gatherings are conducted with officials at regional events. When the Emperor Emeritus and Empress Emerita were the emperor and empress, they remained in one place and attendees formed a line to speak to them. Now, the Emperor walks around the venues talking to attendees.

The Emperor’s reign has gotten off to a good start partly because the Empress has recovered her health.

Though the Empress has suffered from adjustment disorder and is still recuperating, she has accompanied the Emperor on all of his trips to regional events since he ascended to the throne.

Close aides to the Imperial couple seem relieved about her recovery, with one saying the

Empress is “quite well.”

The Empress has also conducted solo official duties. As the honorary president of the Japanese Red Cross Society, she attended its national convention in May and an award ceremony of the Florence Nightingale Medal in August.

From May to September this year, the number of days on which the Empress conducted some form of activity was 61, compared with 32 days last year.

The number of days when the Empress carried out official duties also increased from 12 to 29.

Regarding the extent to which the Empress has recovered, a senior official of the Imperial Household Agency said, “Honestly speaking, we had not imagined this last year.”

“Because her schedule will continue to be difficult, we want to strongly support her,” he added.

The Imperial couple’s daughter, Princess Aiko, is a third-year student at Gakushuin Girls’ Senior High School, and actively participates in sports festivals and other school events. It is likely that the princess will enroll in university next spring.