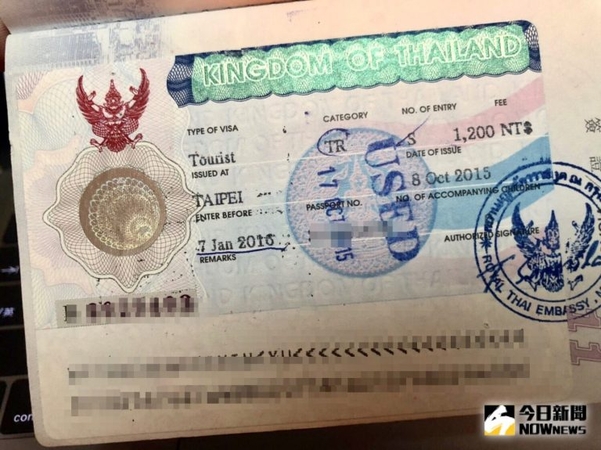 The government has expressed concern over new Thailand visa application rules for Taiwanese tourists that include evidence of the applicant's finances. (NOWnews)

TAIPEI (CNA) — The government has expressed concern over new Thailand visa application rules for Taiwanese tourists that include evidence of the applicant’s finances.

The Thailand Trade and Economic Office (TTEO) in Taipei implemented the new visa application scheme Nov. 30, with individual travelers holding Republic of China (Taiwan) passports required to apply for their visa online and schedule an appointment to submit their passport in person at the Thai representative office.

Previously, individual Taiwanese travelers could go directly to the TTEO at any time to apply for a tourist visa without having to fill out an online form and make a prior appointment.

Opposition Kuomintang (KMT) legislators on Monday demanded that MOFA file a protest over what they described as a tightening of the visa application process.

Tseng Ming-ching (曾銘宗), KMT caucus whip, pointed out at a press conference that while the Taiwan government grants visa-free privileges to Thai visitors, the Thai government does not reciprocate.

Regarding the complaints, MOFA said in a statement late Monday that it understands the sentiment of the general public and has already conveyed dissatisfaction to the Thai government.

“We have asked the Thai side to clarify the new process and will continue to urge it to improve the convenience of visa applications for Taiwanese,” the statement said.

MOFA also defended Taiwan’s visa-free privileges for visitors from Thailand, arguing that the policy has resulted in a growth in the number of Thai tourists, as well as educational and business exchanges between the two sides. It did not provide statistics.

Meanwhile, the Thai representative office issued a public notice on Monday clarifying that the new e-visa scheme is not directed only at Taiwan but also to visa applicants from other countries, such as the United Kingdom and France.

Although tourists from these countries enjoy visa-free entry privileges for tourism purpose, they still need to go through the same e-visa application process when they apply for student, business or marriage visas, a TTEO official told CNA.

The new e-visa scheme also requires applicants to submit bank details for the last three months as proof that they can cover their travel expenses, a measure that has angered some Taiwanese people.