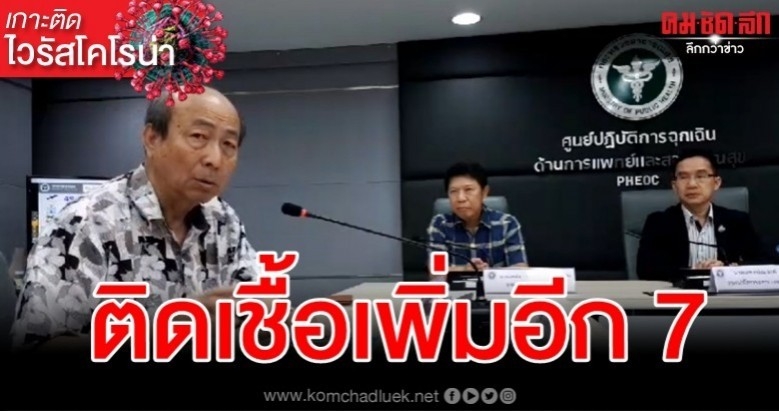 The Department of Disease Control told a press conference on Saturday (February 8) that seven new cases of the novel coronavirus pneumonia had been found in Thailand.

“Out of these seven patients, four are Chinese nationals and three are Thais,” director-general Dr Suwanchai Wattanayingcharoenchai said. “One of the latter is a person who was brought back from Wuhan on an AirAsia flight and arrived at U-Tapao International Airport in Rayong province on Tuesday [February 4]. His roommate was quarantined and examined but later tested negative.”

Dr Suwanchai added that two other Thai persons who tested positive for the coronavirus had occupations that required constant contact with foreign tourists. “As for the four Chinese persons found to be newly infected, three of them are family members of an existing infected patient, while the other one was a tourist who came for a physical checkup following the Public Health Ministry’s advice after they had arrived in Thailand.”

As of today the number of confirmed infected patients in Thailand currently under hospital care is 22, most of whom are starting to recover. Those in a critical state are being treated at Bamrasnaradura Infectious Diseases Institute but their condition is now stable. Ten patients had completely recovered and had been discharged, bringing the number of accumulated cases of infections in Thailand to 32.

As for global statistics, from January 5 to February 8 the new coronavirus has infected 34,410 people and caused 719 deaths. China alone reported 34,083 cases and 654 deaths.