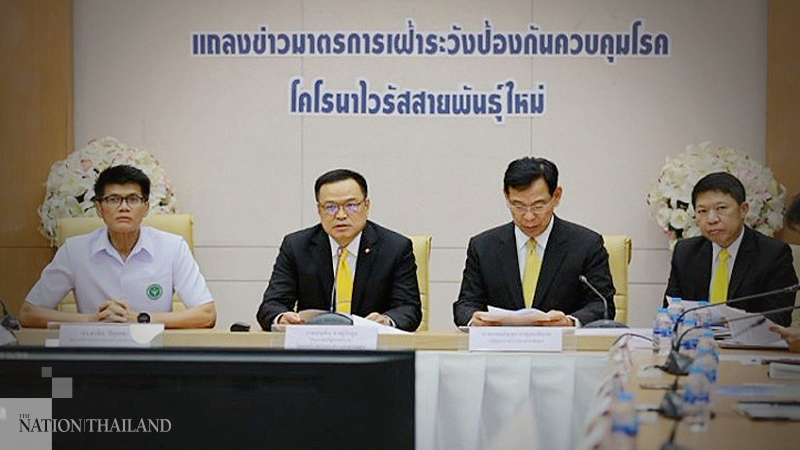 Confirmed conronavirus cases rise to 35 as another Chinese tested positive

A member of a Chinese family visiting Thailand has been tested postive for coronavirus infection, bringing the number of confirmed cases in Thailand to 35, the Department of Disease Control (DDC)announced on Monday (February 17).

The department will adjust its screening process , putting more focus on people from Hong Kong and Taiwan while closely monitor visitors from Japan and Singapore where the risk alert have been raised to the third level..
The ministry has prepared measures and plans in the event of the risk alert in Thailand being raised to the third level from the second.
DDC says it is testing a 5-minute test-kit for its accuracy, in order to hasten the testing process from a few hours. The department also added that Thailand will be hotter in a couple months, which would help contain spread of the virus.
Meanwhile, Public Health Minister Anutin Charnvirakul said foreign passengers on the Westerdam cruise ship would not be allowed to enter Thailand and he had instructed all airlines flying from Phnom Penh and Siem Reap to stop selling tickets until the 14- day quarantine period has passed , starting from February 14.
As for Thai nationals on the cruise ship, they could return to Thailand but will also be quarantined in hospitals for 14 days . There are 21 Thais on board , three returned before announcement of the confirmed case in Malaysia.
DDC director Dr Sopon Iamsirithawon added that the risks from infected people on a cruise ship were higher than people travelling from risk areas, since spreading is made easier in a confined space .
Dr Naris Boonthanapat, an epidemiologist at Mae Sot Hospital in Tak province, updated the situation in the border areas, saying that all Chinese working in Myanmar must stay in Mae Sot district for a total of 14 days before returning to the their jobs.