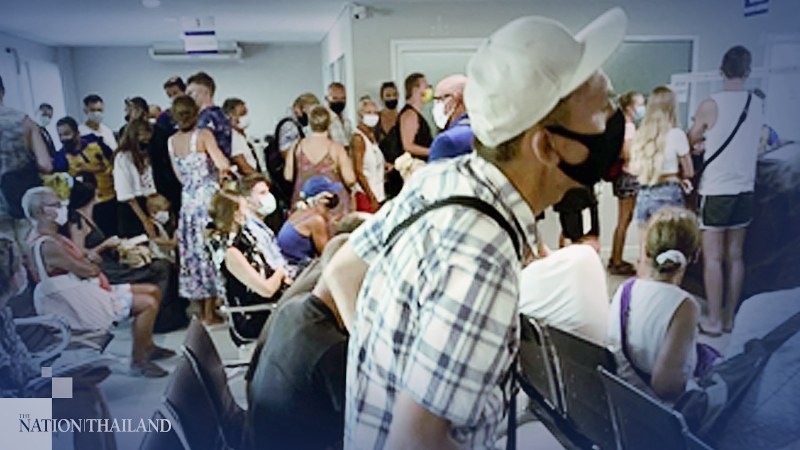 A picture taken on Friday evening shows a crowd of foreign nationals applying for visa extension at Koh Samui Immigration Office, which serves both tourists in Koh Samui and Koh Phangan.

Tourists stranded in Koh Samui were treated badly by Immigration officials, a German tourist moaned. The tourist, whose name is being withheld by The Nation to spare him any potential trouble, complained that he and other tourists had to be in a crowded office at the Immigration centre in Koh Samui to apply for visa extension.

He said crowds of tourists are a Covid-19 risk, as officials did not impose social distancing at the Immigration counter service.

He accused Thailand of taking advantage of tourists who could not fly back home due to flight cancellations and many countries imposing restriction on people movement.

“Thailand is taking advantage of tourist by forcing them to come and extend their visas for money, while all reasonable countries in the world extend the visa automatically for a certain date,” he said.

The Thai government announced on Tuesday it would extend visa automatically for tourists who had entered the country after March 1.

In response to the complaint, an official at the Foreign Ministry told The Nation that Immigration authorities are aware of the issue and the Cabinet had agreed in principle about the automatic visa extension. Officials are working out details and will shortly make an official announcement, he added.