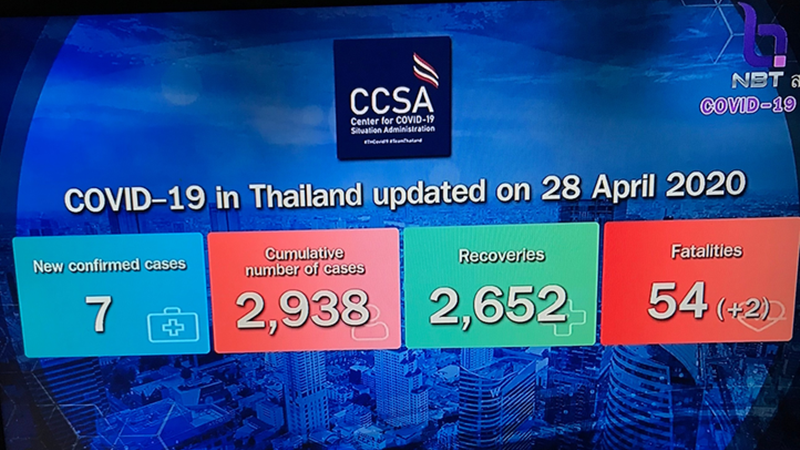 Thailand saw rapid progress in containing the Covid-19 outbreak, recording single-digit new cases for the second successive day, with seven new ones but two deaths over a 24 hour period and bringing the total number of cases to 2,938, Dr Taweesin Visanuyothin, spokesman of the government’s Centre for Covid-19 Situation Administration, said today (April 28).

“Today is the second day the number of new cases has dropped below 10,” he pointed out.

Monday was the first time new cases dropped to single digits at 9 – the lowest since the peak of 188 on March 22.

With two new deaths, the number of fatalities has gone up to 54, while 2,652 patients have recovered and returned home and 232 are undergoing treatment in hospitals.

Among the new cases, three were in Bangkok, three in Phuket and one in Nakhon Ratchasima. Five of these patients had been in contact with former cases, one had visited crowed places and another, a Chinese, was under medical investigation.

Taweesin said Pattani and Nonthaburi have found new Covid-19 cases in the past 14 days, while Loei, Phang-nga and Nakhon Si Thammarat have had no new patients in this 2-week period. Uttaradit meanwhile has found no new case in the past 28 days.

“No northern province has seen any new case during this period,” Taweesin added.

Meanwhile, Phuket province had a cumulative 214 confirmed cases of Covid-19 during the January 5-April 27 period, according to the provincial communicable disease committee.

Of this total, 173 have recovered and gone home, two have died and 39 are being treated in hospital.

The province has tested 8,013 people so far for the virus.

The latest fatality is a female restaurant owner aged 63, who lived in Kratu district. She fell sick on March 24 and was admitted to hospital on April 1. She passed away on April 27.