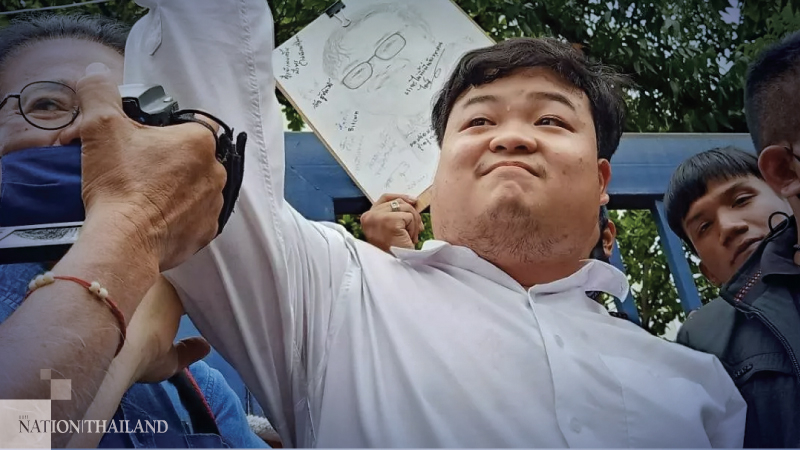 A student leader vowed to push for their 10-point manifesto to reform the monarchy despite government crackdowns on pro-democracy protesters.

Student activist leader Parit Chiwarak defied police pressure and reiterated that the youth-led protests on Sunday would not drop previous proposals to reform the monarchy despite government authorities trying to block them by using legal harassment.

Parit was arrested on Friday and charged with eight offences, including sedition. However, the Criminal Court granted him bail on condition that he not repeat the alleged offences.
After being released, Parit told reporters that he and student protesters would not back off and would continue to fight for reforms to the palace.
He read a manifesto containing 10 demands to reporters, the manifesto first announced on August 10 at Thammasat University’s Rangsit Campus, that drew both support and criticism in the wider society.
The proposals included annulling Article 6 of the Constitution which prohibits any legal action against the monarch, and scrapping the lese majeste law which shields the King from criticism. They also urged the government to separate the King’s personal wealth from assets under the Crown Property Bureau, which are estimated to be worth many billions of dollars. The manifesto also asked the government to cut the annual national budget of the palace in line with economic conditions, adding that donations for the Royal Family should come to an end. It also proposed an end to one-sided education that praises the royal institution. Protesters also called for investigations into the suspected forced disappearance of individuals who had been outspoken against the monarchy.
Protesters are also demanding transferring back of military units in Bangkok to government agencies, and  revoking the recent emergency law that allows the King to directly oversee the units.
Meanwhile, the monarch should not endorse any coup and should refrain from expressing political views in public, the manifesto said.
Parit reiterated that the students' proposals were not aimed at toppling the monarchy but to bring the institution within the bounds of democracy and the principle of constitutional monarchy.
The anti-government protest will take place on Sunday at Bangkok’s Democracy Monument, starting at 3pm and ending at 9pm.
Meanwhile, government supporters on Saturday also announced that they would hold a rally at the same place at 11am and will stay there in order to gather evidence for taking legal action against pro-democracy groups. Police have reportedly secured arrest warrants against several key student leaders, while PM Prayut Chan-o-cha has denied that he had ordered the crackdown on pro-democracy protesters.