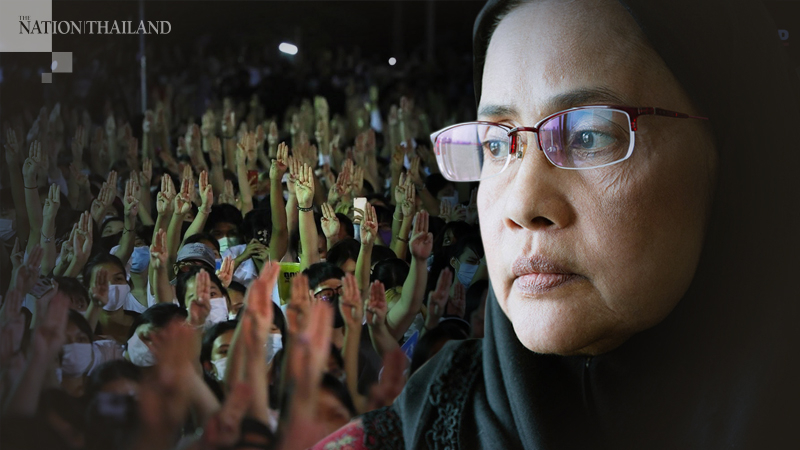 Local human rights experts have warned a rival group against misinterpreting student protesters’ demands for reforms to the monarchy.

Angkhana Neelapaijit, a former commissioner at the National Human Rights Commission, posted on her Facebook page expressing her support for the basic right to freedom of speech and expression.

As university and high school students join a campaign for amendment of the Constitution, the dissolving of Parliament and stopping the government from intimidating its critics, some opponent groups, including some senators, have distorted and misinterpreted the youth's demands as an attempt to overthrow the monarchy, she said in a post on her Facebook page.
“Such misinterpretation could lead to more violence in Thai society," she warned.
Her comments come as some politicians, senators and ultra-royalists have accused a 10-point manifesto to reform the Palace raised by students at Thammasat University as an attempt to undermine the highest institution. Among 10 proposals to make the institution accountable is a demand for the government to open investigations into suspected forced disappearance of several individuals who had been outspoken against the government and the monarchy since the 2014 military coup.
Regarding a public debate on the King's role, Angkhana quoted Eakpant Pindavanija, acting director at Mahidol University’s Institute of Human Rights and Peace Studies, as saying that Thai society should take into account the difference between debating on the King's role stated in the Constitution and ill-intentioned speech that might insult the King personally.
Interested people can visit https://www.facebook.com/watch/?v=936017076877471 for details of Eakpant’s comments in the Thai language.
She said it was a cause for concern as some groups had threatened the youth protesters with judicial harassment. For example state authorities have stalked the staff of Thai Volunteer Service Foundation and Prachatai.com, a news website, she noted.
She warned police that they should not arrest people during holidays or night time and emphasised that police would not have enough jails to detain people as more and more people would speak out.
Over the past few days, police have arrested three leaders of the protesters -- Arnon Nampa, a human rights lawyer, Phanuphong Chatnok, leader of Free Youth in the eastern region, and Parit Chiwarak, best known as “Penguin”, a leader of Thammasat University’s students. The three were charged on several accounts, including sedition. However, the Criminal Court granted them bail.
Angkhana called on the government to follow the advice of the president of the Criminal Court who commented that the court preferred to apply political principles rather than legal tools in dealing with protesters. The president of the Criminal Court made the comment on August 8, the day Arnon and Phanuphong were released on bail.
She also demanded that the government ensure every one were safe and warned that if government used violence against protesters, the government's legitimacy will come to an end.
“Nobody must not be harmed and there must be no enforced disappearance because of difference of opinion with the government,” she added.
Angkhana’s husband, Somchai Neelapaijit, was abducted 16 years ago and never found.