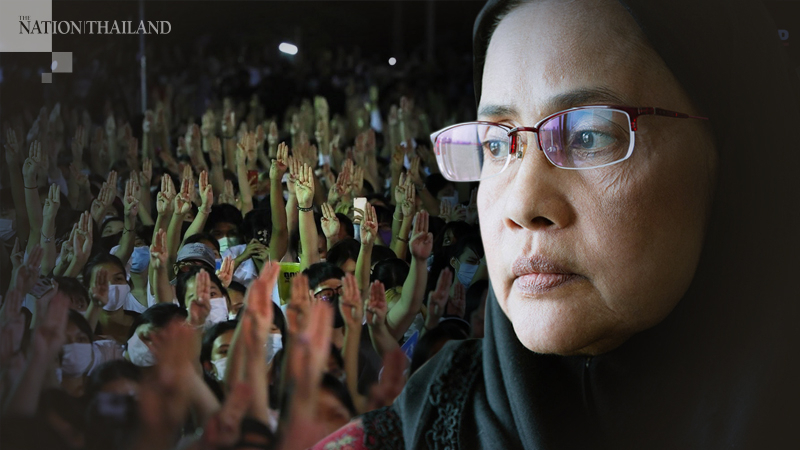 In a Facebook post on Thursday, human rights activist Angkhana Neelaphaijit said the solution Prime Minister Prayut Chan-o-cha proposed on Wednesday evening was insincere and two-faced, because the government always says one thing and does another.

In a televised address, Prayut urged protesters to step back from a “path that would lead to the country’s downfall” and promised to lift the “severe” state of emergency in the capital if nothing serious takes place.
“The arrest of protest leader Passarawalee Thanakijwibulpol of the Mahanakorn for Democracy Group on Wednesday night raises questions about the operation of undercover police,” said the former member of the National Human Rights Commission.
“The authorities should have issued a summons instead of arresting a woman in the middle of the night without presenting any official ID. This is in clear violation of International Convention on Civil and Political Rights, to which Thailand is a signatory.
“The police spokesperson also spread false information when she announced on Wednesday that the suspension of BTS services was a cooperation between BTS and the Royal Thai Police. Later, BTS announced that they were ordered by the National Police chief to suspend train services during the protests,” Angkhana said.
“Police also have yet to explain what chemical was mixed in the water that they sprayed on protesters at Pathumwan intersection on October 16.
“If the government genuinely wants to step back from the brink, they need to revoke the state of emergency immediately and release all protest leaders that have been arrested, while PM must admit that he made a mistake in handling the situation,” said Angkhana.
Angkhana also cited UN Special Rapporteur in Freedom of Association Clement Voule, who has called on the government to refrain from using force against peaceful protesters, because “peaceful protest is not a crime but a democratic means for people to express their grievances and demands”.
Prayut announced that the state of emergency was being lifted as of noon on Thursday.