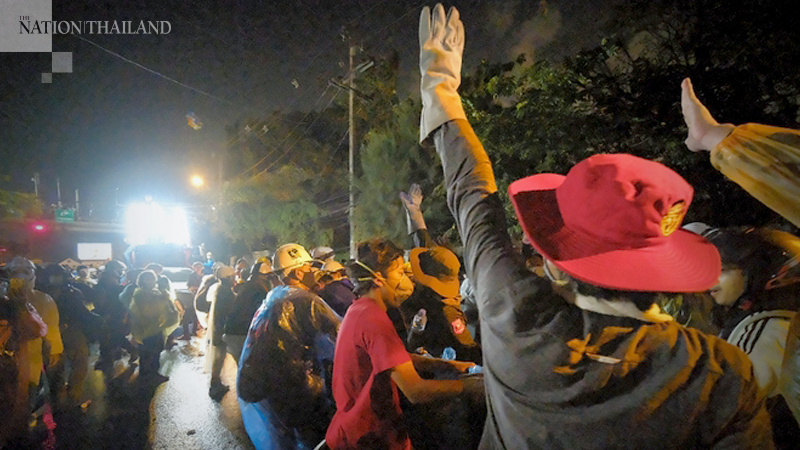 The “Free Youth” pro-democracy group has urged its supporters not to surrender, after the prime minister declared that “all relevant laws” will be used against protestors.

On Thursday, PM Prayut Chan-o-cha warned that the government and security agencies would step up law enforcement to handle demonstrators who act illegally and fail to respect other people's rights and liberty. The warning came after two days of protest culminated in protesters splashing paint over signs and walls at police headquarters in Bangkok on Wednesday, in retaliation for a crackdown with tear gas and water cannon on Tuesday.

Free Youth said the PM’s statement also sounded like a declaration of war by the government against the people.

The group said it was not discouraged by the actions of a “failed government” against peaceful protests such as paint splashing. It stated that the future of Thailand depended on all Thai people – whether office workers, landowners, farmers, etc.

The pro-democracy Ratsadon movement would not surrender to a government that had failed in its duties, it said.

“If we do not fight, we will be slaves for years. Be ready for the actions of the failed government,” the Free Youth statement said.

The government “has done justice to the paint-splashed signs by cleaning and repainting them. But it has not offered justice to the victims of authorities,” said Pavin Chachavalpongpun, a self-exiled academic living in Japan.

Meanwhile, activist Sombat Boonngamanong said it was ridiculous to see a PM who came to power in a coup using legal means to deal with citizens who only want him to resign.

Prominent lawyer and protest leader Arnon Nampa urged government officials to take a stand, as the PM had declared war on the people.

“You need to choose, whether to live in the past or to create a new future with us,” he posted on Facebook. He insisted that the Ratsadon protesters would continue peaceful demonstrations to the highest level.