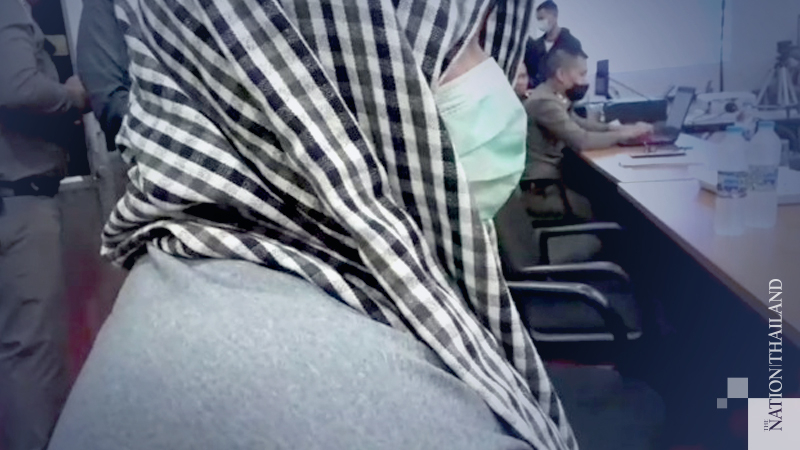 Peerawut Kunamonkan, 49, dragged his 25-year-old son Passapong to Phaholyothin Police Station on Friday to face charges of attempted murder, illegal possession of firearms and ammunition and shooting in public without reasonable grounds.

The former Min Buri Polytechnic Technology College student is accused of shooting Prachakorn Saksritao, 20, a former student of Pathumthani Technical College, when the anti-establishment protest outside SCB headquarters was dispersing on Wednesday night. Prachakorn was a member of the protesters’ security outfit.

Thanadech Srisongkram, 35, chief of the Minburi vocational students guards, who accompanied the suspect, confirmed to police that the motive of the shooting was personal. He said the shooting had nothing to do with the monarchy, protest, politics or the ongoing protest. He said his group was not linked to other political groups as accused by netizens. Thai netizens have been digging through photographs of yellow-shirt royalists and claim Passapong looks like one and had joined the protest as a spy.

Thanadech said he has apologised to the security team from Pathumthani Technical College and has announced that such a problem will not occur again.

Passapong has accepted every charge and said he had been angered by Prachakorn’s sarcastic posts after his group showed displeasure towards protesters’ insulting comments about the monarchy.

He said his group joined the protest on Wednesday night as a volunteer guard, but was not wearing an armband. He also confirmed that nobody paid him for creating a dangerous situation, adding that he will pay for the victim’s treatment himself.