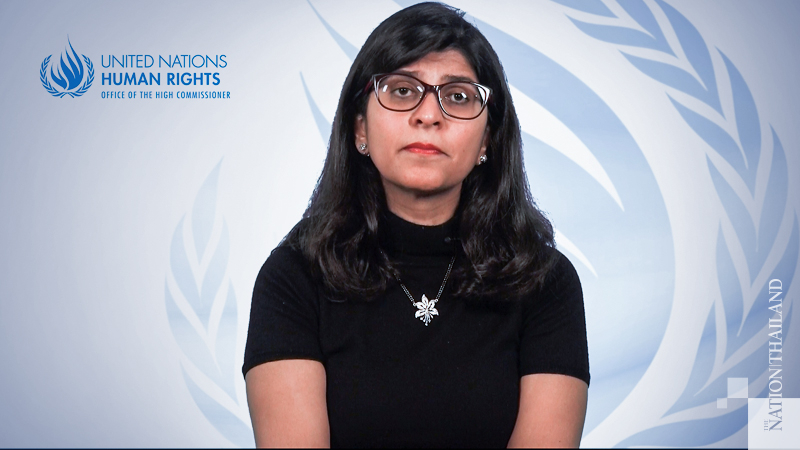 The United Nations High Commission for Human Rights (OHCHR) has expressed dismay at the move by Thai authorities to charge at least 35 protesters, including a child, with lèse majesté under Article 112 of the penal code.

“We are particularly alarmed that [a] 16-year-old protester was yesterday [December 17] presented by police to the Juvenile Court with a request for a detention order,” said OHCHR spokesperson Ravina Shamdasani.
The OHCHR, which oversees implementation of the International Covenant on Civil and Political Rights, had repeatedly called on Thailand to bring the lèse majesté law in line with the country’s international obligations, she said
“It is extremely disappointing that after a period of two years without any cases, we are suddenly witnessing a large number of cases, and – shockingly – now also against a minor,” she added.
“We also remain concerned that other serious criminal charges are being filed against protesters engaged in peaceful protests in recent months, including charges of sedition and offences under the Computer Crime Act. Again, such charges have been filed against a minor, among others.”
The UN rights body called on the government to stop bringing serious criminal charges against individuals for exercising their rights to freedom of expression and peaceful assembly. People should be able to exercise these rights without fear of reprisals, it said.
“The UN Human Rights Committee has found that detention of individuals solely for exercising the right to freedom of expression or other human rights constitutes arbitrary arrest or detention,” said the spokesperson.
“We also urge the government to amend the lèse majesté law and bring it into line with Article 19 of the ICCPR on the right to freedom of expression.”