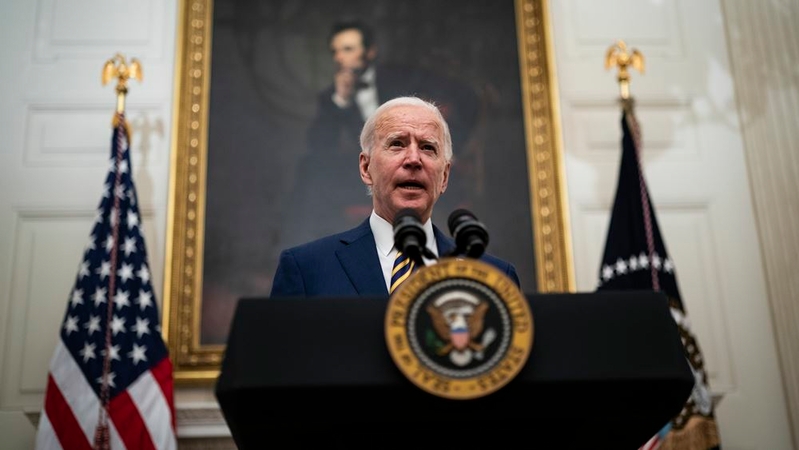 President Biden speaks about the economy before signing executive orders in the State Dining Room at the White House on Jan. 22, 2021. MUST CREDIT: Washington Post photo by Jabin Botsford.

WASHINGTON - President Joe Biden and his team issued 17 executive actions and directives, fielded 28 questions during a news briefing and swore in more than 1,100 people to serve in his administration. And that was just on Day One.

In the first few days of Biden's administration, aides to the new president have also blasted out fact sheets and memorandums - a veritable redwood worth of paperwork - and quietly reached out to a range of interest groups and politicians of both parties.

The technocrats, in other words, are back - complete with their return to regular order and aspirations of rigorous monotony.

The whirlwind of activity, both public and private, was part of a planned launch of his presidency that began in late April - before Biden had formally clinched the Democratic nomination - designed to showcase Biden's promise to restore what he and his aides view as normalcy to the White House.

"They are running normal policy processes," said Neil Bradley, the executive vice president and chief policy officer at the U.S. Chamber of Commerce. "For those of us who've been in Washington a long time, it is the normal policymaking process that we've been familiar with for a long time. And that, from our perspective, seems to produce better, more informed policy."

But if Biden and his team view his mantra of "Build Back Better" as a lofty goal, many Republicans see it as a return of the swamp. Former president Donald Trump's rise was fueled by voters who viewed Washington as a town of bureaucrats and elites removed from the struggles of their daily lives - and who appreciated Trump's disdain for the usual way of doing things.

"I'm not sure what a new normal looks like, because I think the Trump way of doing things and his nonpolitical approach has a certain appeal to voters, and that's going to have to be part of this new normal," said Neil Newhouse, a Republican pollster.

Referring to Biden's relatively staid Twitter feed, Newhouse joked, "Are we still waiting for his first tweet? Many Americans are used to right now communication by Twitter. I think some people actually miss that."

The president's team is betting that most Americans won't.

Biden tapped former senator Ted Kaufman, D-Del., to run his transition on April 22. He pulled in several others, and what started as handful of trusted Biden advisers ballooned to a staff of more than 400 paid transition employees by Jan. 20.

Another 1,000 volunteers also helped in a number of ways, including vetting potential hires - a mammoth task that involved more than 8,000 interviews.

Guided by Biden's speeches and remarks on the campaign trail, they turned the candidate's public decrees and promises into legislative language. When Biden delivered his major economic speeches over the summer, they took the text and broke it down into separate executive orders and tracked what he was promising on the first day, first week and first 100 days.

"Every single one of the things you're seeing, there is a massive amount of planning," said Kaufman, referring to the opening days of the administration.

Proposals were drafted and then vetted by multiple rounds of attorneys, including career lawyers inside the Justice Department. Two major pieces of legislation were put together: One for coronavirus relief and another on immigration.

There was also an employee handbook for the transition. "There is no transition without a successful campaign" was one quote from the book. Another focused on tone: "No egos, no drama, no task too small for anyone. We have each other's backs."

The groups included the typical constituencies that are part of the Democratic coalition including labor unions, civil rights organizations and women's groups. But they also targeted those more typically aligned with the GOP.

"Uniting America is not about just giving speeches - it's not even about announcing policies," Kaufman said. "It's about getting down, doing the hard work and talking to members of Congress, talking to governors and talking to people in normally Republican areas."

Bradley, whose group has commonly aligned with Republicans, called it "a highly organized, I would say very efficient process."

"It removes multiple layers of uncertainty or confusion," he said. "We may not always agree with the direction that they're going, but at least you have a sense of understanding it and that is exceptionally helpful to the business community - just knowing how policy is unfolding."

With the Trump administration, by contrast, "everyone was scrambling to figure out what was going on," he said.

Biden's nominees have also been making the rounds, such as a visit by Treasury Secretary nominee Janet Yellen with the National Association of Manufacturers executive committee.

Timmons, who was once the head of the National Republican Senatorial Committee, said that Biden's approach has been "refreshing."

It helps that he's known Biden since he was a Senate aide two decades ago. "In Joe Biden, you have just a decent human being," Timmons said. "He's willing to listen to all points of view."

The outreach provided an early benefit when these right-leaning groups, including the Chamber, NAM and the Business Roundtable issued statements on Jan. 4 urging members of Congress and others to accept Biden's electoral college victory.

That happened in some cases after the Biden transition reached out asking for the help, according to a business lobbyist familiar with the effort who requested anonymity to discuss private talks.

"They expressed their concerns about the road that we were going down and where that might lead, which were, frankly, concerns that a lot of people in the business community shared," the lobbyist said.

The Biden team's message was clear: "Folks speaking up would be helpful," the lobbyist recalled. "A lot of folks in the business community were happy to." Biden's transition confirmed the outreach to business groups, but noted that in some cases business organizations proactively asked how they could help.

White House press secretary Jen Psaki has highlighted the support for Biden's covid relief package from business groups, saying there has been an "outpouring of support" for various parts of the package "from everyone from Bernie Sanders to the Chamber of Commerce."

But the Biden team's concerted effort to revive some of the basic traditions of past White Houses also has its risks. Washington trying to work together can look an awful lot like elites palling around, or the overly clubby atmosphere that gave rise to the early enthusiasm for Trump's candidacy.

"President Biden is talking like a centrist, he is using the words of the center, talking about unity, but he is governing like someone from the far left," Sen. Marco Rubio, R-Fla., said in a video message on Friday.

"He has ordered more executive fiats than anyone in such a short period of time - ever. More than Obama, more than Trump, more than anyone," Rubio said, referring to the flurry of executive actions Biden has signed.

Over about 48 hours, Biden signed more than two dozen executive actions and one piece of legislation - granting his Defense Secretary Lloyd Austin a waiver exempting him from a law requiring the head of the Pentagon to have been out of uniform for at least seven years.

He took aim at Trump's record on climate change, immediately rejoining the Paris climate accords and rescinding the permit for the Keystone XL pipeline. He reoriented his administration on the response to the coronavirus pandemic, reversing Trump's decision to withdraw from the World Health Organization and imposing a mask mandate on federal property.

The Biden White House is also engaging in some age-old traditions, like blaming the previous administration for the crises they face. Jeff Zients, the head of Biden's coronavirus task force, told reporters recently that "what we are inheriting from the Trump administration is much worse than we could have imagined," and other aides - without providing specifics - have anonymously claimed that the Trump team left behind absolutely no coronavirus strategy.

Biden's team says it plans to bring back the practice of daily press briefings, and promised transparency with the American public. But that doesn't mean they are above the timeless tradition of skilled obfuscation: Psaki, for instance, has repeatedly declined to share Biden's position on whether he believes Trump should be convicted of inciting the Jan. 6 Capitol riot in the upcoming Senate impeachment trial.

"Well, he's no longer in the Senate, and he believes that it's up to the Senate and Congress to determine how they will hold the former president accountable and what the mechanics and timeline of that process will be," Psaki said Friday.

For many Democrats, the return of the so-called establishment - or the "seasoned," in the preferred nomenclature of Rep. Debbie Dingell, D-Mich. - is a welcome change.

"I don't care what anyone says - it was a beautiful, wonderful inauguration but 26,000 National Guard troops surrounding you isn't a sense of calm, and I think just normal is good," Dingell said, referring to the heavy security implemented in the wake of the Jan. 6 siege by pro-Trump supporters. "People want to hug each other and go out to dinner and we can't do that, but at least here's a process by which you can try to get things done."

The Biden White House also reinstated its subscriptions of the New York Times and The Washington Post in the West Wing - a practice stopped under Trump during a moment of fury at the publications, though he continued to avidly consume news from both papers.

And during a new conference Friday, Psaki jokingly made clear that Biden's priorities are distinctly different than those of his predecessor.

"I can confirm to you here: The president has not spent a moment thinking about the color scheme of Air Force One," Psaki said, a jab at Trump's fixation on replacing the traditional baby blue of the presidential aircraft with colors inspired by the American flag.