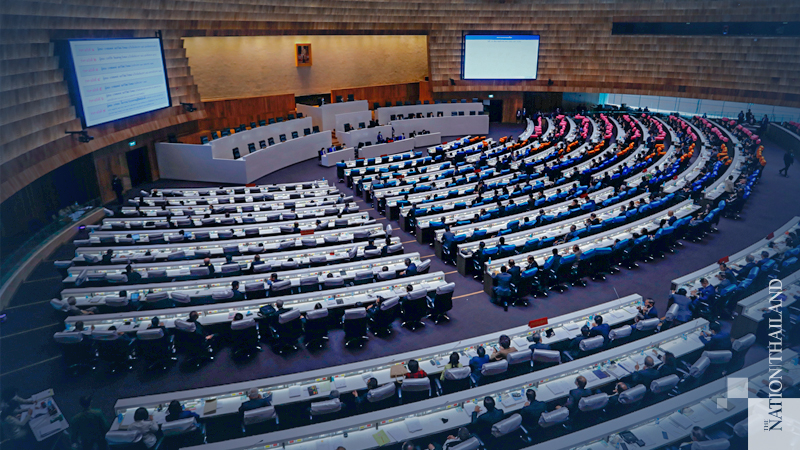 The government's vaccine deal and Covid relief packages are expected to be hot topics during the upcoming no-confidence debate in Parliament.

The coalition government’s MPs had tried hard to oppose the debate by demanding that the opposition MPs make changes to some words in the motion that accuses the government of exploiting the monarchy institution to cover up its failures in running the administration. The opposition has remained unyielding and insisted on going ahead with the original words of the censure motion. The no-confidence motion has been placed on the House agenda and the censure debate will take place in mid-February.

In the run-up to the parliamentary session, the government's response to criticism of its vaccine deals has been disproportionately aggressive.

The Ministry of Digital Economy and Society filed a legal case against Thanathorn Juangroongreaukit, leader of the Progressive Movement, accusing him of insulting the monarchy after Thanathorn openly criticised the government’s vaccine deals, which also involved the royally-owned Siam Bioscience.

Against this backdrop, the public may wonder how both the opposition and government MPs would handle sensitive issues related to the Palace after pro-democracy protesters raised the issue of monarchy reform since last year and as a consequence, many of them are facing charges of insulting His Majesty the King.

“If the issues related to the role of monarchy are raised in the upcoming parliamentary debate, it may lead to wider and normal discussion about the role of the Palace,” said Titipol Phakdeewanich, dean of the Faculty of Political Science at Ubon Ratchathani University.

“It is unfortunate that politicians on the government side represent the old mindset that rejects social change and sees the new generation as a threat to the establishment,” he lamented, objecting to the use of section 112 to target critics.

Titipol called on the government to be open to scrutiny.

Many observers are also interested in how Public Health Minister Anutin Charnvirakul will clarify the delay in securing vaccine supplies and whether he will disclose the vaccine contacts with AstraZeneca, the vaccine developer, and Siam Bioscience, a designated local vaccine manufacturer for AstraZeneca. Earlier Anutin had refused to disclose the contracts, arguing that it involved private companies, though many critics argued that the government was using tax money to support Siam Bioscience. And recently, the European Commission has made its contract with AstraZeneca available to the public, following a conflict over vaccine delay. The EU move might indirectly add pressure on the Thai government to disclose the vaccine contracts.

On the Covid-19 relief package, the government has faced criticism for extending the 90 per cent relief on land and building tax for another year. Many people see the landlords as having the ability to pay the tax. The land and building tax was expected to serve as a tool to narrow the widening inequality between the rich and the poor. The wealthy also have more choices to manage their assets compared with those who do not own large property. For example, KBank Private Banking offers financial asset investment services for the rich who hold large properties.

Finance Minister Arkhom Termpittayapaisith defended the tax break, saying the government's tax breaks would leave people with more money to spend during the contraction of the economy.

Somjai Phagaphasvivat, adviser to Prime Minister Prayut Chan-o-cha, said that inequality was a long-term issue and the government may need to jump-start the economy first during a pandemic that had affected the whole economy. He agreed that economic inequality was a serious issue that the country had been facing for long. In the long run, the movement has to deal with market monopoly by a few giant firms, such as in the retail sector. Education reform is needed to up-skill Thai workers, said Somjai, who is also a political scientist.

He, however, said the opposition had a chance to discredit the government and could leverage it for the upcoming local government elections. But the debate was unlikely to make a big change as the coalition government’s unity remained strong, and there was no sign of any parties breaking away, he said.

Intensified pro-democracy protests last year have raised people's awareness of their rights around the country and politicians are expected to touch on the subject during the debate.

Gothom Arya, adviser to Mahidol University’s Institute of Human Rights and Peace Studies, said he wanted to see MPs debate on the rights of marginalised groups, such as Karen minority, and whether they should be allowed to live in the forest as they did traditionally. Gothom was referring to the group of indigenous Karen villagers who left their resettlement and returned to their village deep in the forest in Kaeng Krachan National Park recently after they had been evicted from their village in 2011 by park officers.

Many experts believed that the impact of the no-confidence debate would largely depend on the evidence presented by the opposition.

Pipat Luengnaruemitchai, chief economist at Kiatnakin Phatra Securities, said he did not expect much impact from the censure debate, saying the government could have done much better in national administration while the opposition was missing in action. He pointed out that while people had been suffering from PM2.5 toxic dust, there had not been much debate among the government and opposition on this serious issue.

Thanawat Polvichai, president of the University of Thai Chamber of Commerce, said that the Thai government had implemented policies to combat the coronavirus and provided aid to businesses and people, similar to how other governments worldwide had done.

The impact of the censure debate would depend on evidence presented by the opposition to show how the government had failed in combating the virus and providing aid to the people, he added.

While many observers may foresee this no-confidence debate as not leading to an immediate change in the politics, it will provide the public more knowledge about good governance, transparency and accountability of the government.

“Government MPs may wrongly use Parliament as a platform to exercise their power, but a parliamentary session is actually a place to keep people informed,” Titipol said, warning against the possibility of disruption by government MPs during the debate and potential filing of charges under section 112 against opposition MPs.