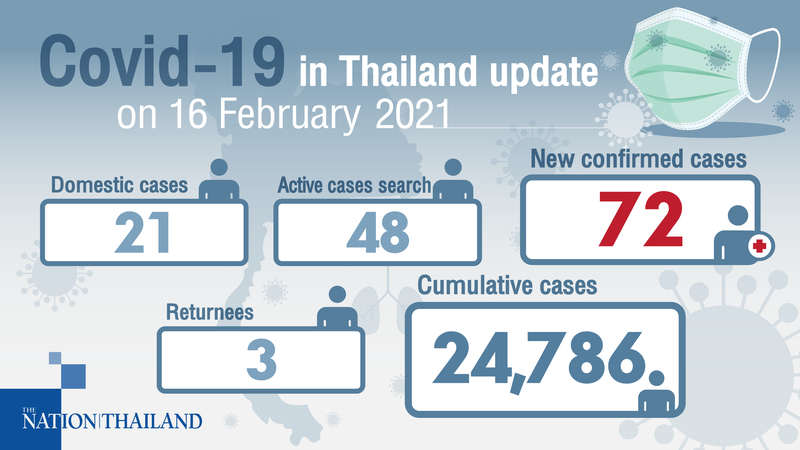 Of the 21 people exposed to the disease while visiting high-risk areas, 16 were in Samut Sakhon, followed by two cases in Samut Sakhon, and one each in Nakhon Pathum, Pathum Thani, and Khon Kaen.

Meanwhile, proactive testing led to the discovery of 48 cases -- 47 in Pathum Thani and one in Ayutthaya.

Of the overseas travellers testing positive in quarantine, a Thai had returned from the United Kingdom, a Lebanese travelled from United Arab Emirates, and an American from her home country.

Meanwhile, 680 patients have recovered and been discharged.

As of Tuesday, the number of confirmed cases in Thailand had risen to 24,786. Of these, 22,136 had been contracted locally, including 14,038 who were found via proactive testing, while 2,650 were returnees. So far, 23,563 have recovered and been discharged, 1,141 patients are still in hospitals, and the death tolls remain at 82.

CCSA spokesperson Dr Taweesin Visanuyothin said that the CCSA committee would assess the situation and make a decision on relaxing some measures next Monday.