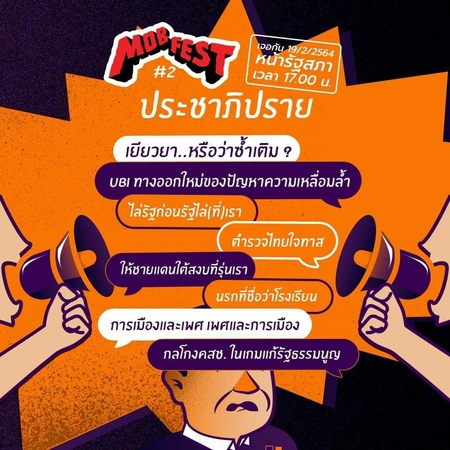 A pro-democracy group, “Mob Fest”, posted on its Facebook page on Thursday that it would hold a “Censure debate by the people” in front of Parliament on Friday from 5pm, during the fourth day of the censure debate against the Prayut Chan-o-cha government by opposition parties.

The official censure debate in Parliament, in Bangkok's Dusit district, began on February 16 and ends on Friday, while the vote on the no confidence motion will take place on Saturday.

“Our debate will address eight key topics that reflect problems under Prayut’s administration,” said the group.

1. Are the government’s measures improving or worsening (people's problems)?

3. Drive the government away before they evict us

4. Thai police are slaves at heart

5. Bring peace to the deep South peaceful during our generation

8. NCPO (National Council for Peace and Order)’s trick in amending the Constitution.