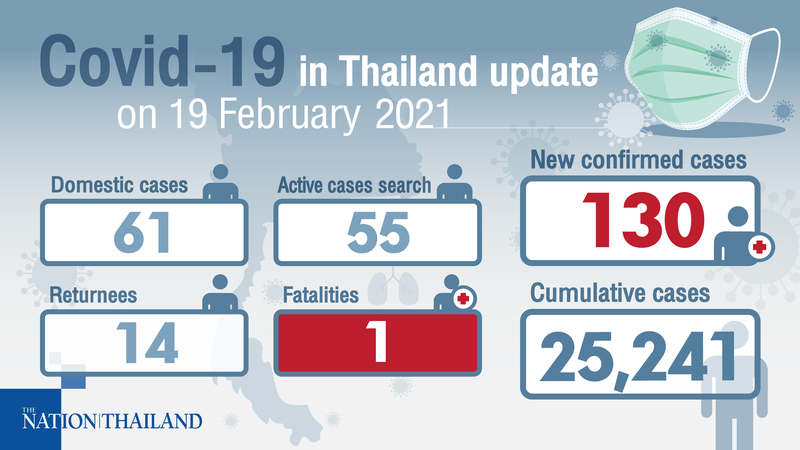 The Centre for Covid-19 Situation Administration (CCSA) on Friday reported 130 new cases and one death.

Of the cases, 14 are returnees in quarantine facilities, while 61 were exposed to the virus while visiting high-risk areas. Samut Sakhon leads the list with 35 cases, followed by 10 in Pathum Thani, and the rest in other provinces.

Proactive tests led to the discovery of 55 cases, with Samut Sakhon again leading the list with 36 cases, followed by 12 in Pathum Thani and seven in Nakhon Pathom.

Of the returnees, nine are Thai nationals returning from Denmark, Italy, Myanmar, Germany, United Arab Emirates and the United States. Also found infected were a Briton and Australian flying in from the UAE, as well as a German, Kuwaiti and Cameroonian flying in from their respective countries.

Meanwhile, a 66-year-old doctor who had prostate cancer became Thailand's 83rd fatality from the virus. He had treated three patients who were linked to a Ponzi Scheme cluster at his clinic in Mahasarakham province between January 13 and 28.

The doctor then underwent his first Covid test on January 29 but was found negative. However, he tested positive two days later and began developing Covid symptoms, mainly muscle ache and fever.

After five days of treatment in Mahasarakham Hospital, he developed pneumonia and had to be put on a respirator. When his condition began worsening, he was transferred to Srinagarind Hospital, where he passed away on Thursday (February 18).

Though the doctor was not a frontline medic in the fight against Covid-19, he has been counted as the first medical personnel to be lost to the virus in Thailand.

Meanwhile, 124 patients have recovered and been discharged.