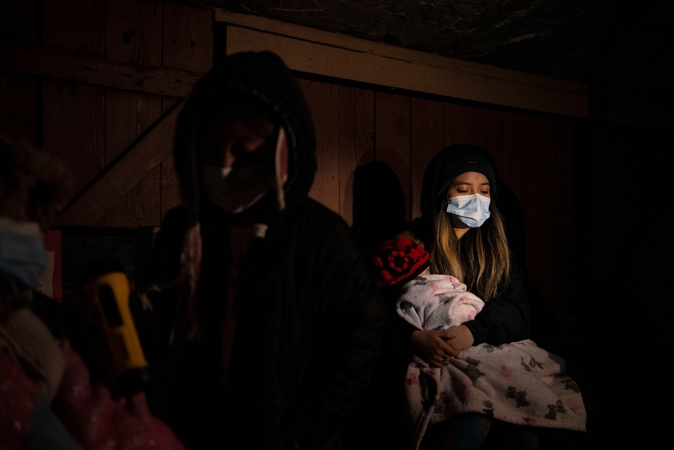 With their power out since Monday morning, Evelyn Hernandez, 15, and her sister, Daeslyn, 1, use a samping stove on their family's front porch in Houston to keep warm. Photo by Callaghan O'Hare for The Washington Post

AUSTIN, Texas - Millions of people across a storm-scarred South were bracing for one last night of extreme cold Friday following a devastating week in which dozens of people died, homes and businesses sustained billions of dollars in damage and basic services such as power and water catastrophically failed.

The reckoning over why - and who is to blame - was intensifying Friday, even as residents were still coming to grips with the scale of destruction. Across the region, homeowners who had fled frigid, energy-starved houses or apartments were returning after the lights finally switched back on. But once there, they discovered burst pipes, flooded floors, collapsed ceilings - and no water to drink.

In Texas, the epicenter of the disaster, more than 14 million people in 160 counties were still experiencing water-service disruptions, with impacts also being felt in Mississippi, Louisiana, Tennessee and beyond.

Houston, the nation's fourth-largest city, was under a boil-water advisory. In Austin, Texas's capital, much of the city was without running water, and officials could not say Friday when it might return. Bottled water had been stripped from the shelves of minimarts and gas stations, and lines were wrapped around some supermarkets, which were imposing purchase limits as residents scrambled for food. 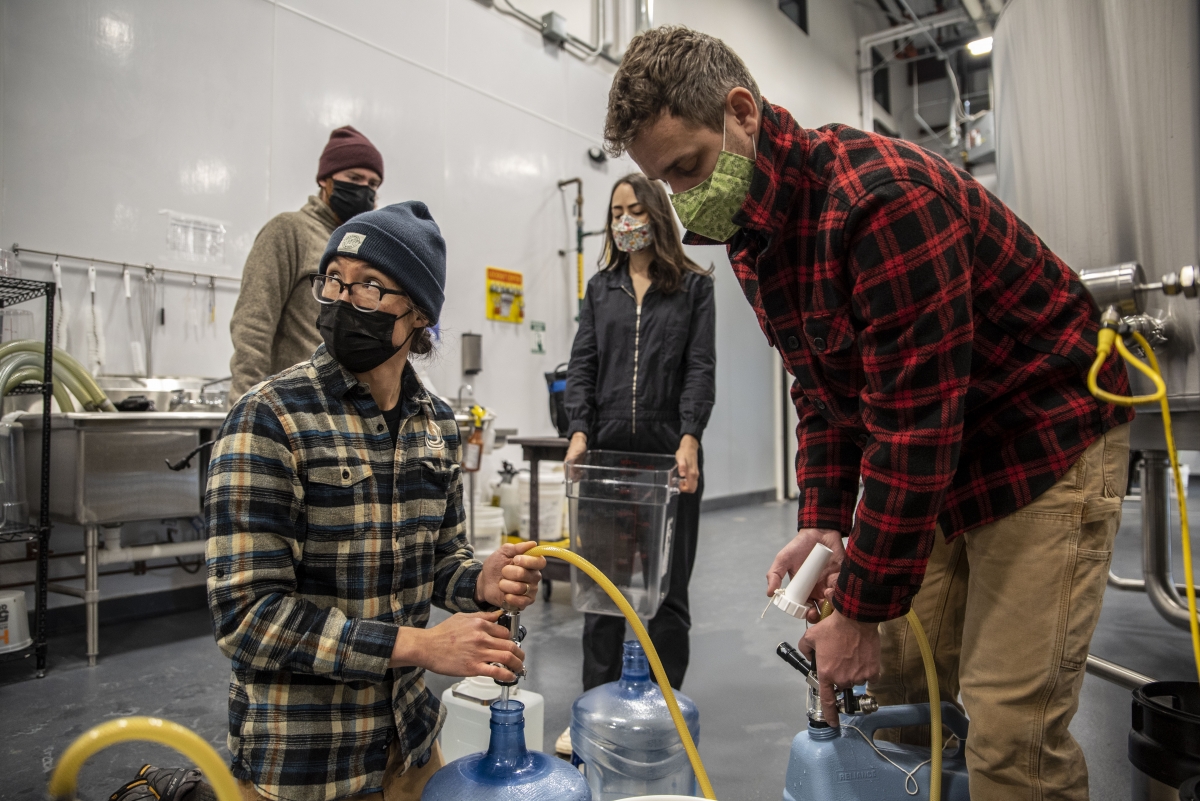 "We know that it's intolerable," said Texas Gov. Greg Abbott, a Republican, during a Friday afternoon news conference.

With a long recovery ahead, the focus was rapidly shifting to who would pay. The Insurance Council of Texas, an organization that represents the state's home, auto, renters and business insurance agents, said the storm would be the "largest insurance claim event in [Texas] history," with hundreds of thousands of claims expected.

"We are used to our storms in Texas with tornadoes, hurricanes and hail," said Camille Garcia, communications director for the council. "But those hit smaller areas. This winter event reached every part of Texas."

Some of the costs of recovery will be handled by the federal government. President Joe Biden said Friday he plans to sign a major disaster declaration for Texas, freeing up funds that can be tapped by individuals who have been impacted, as well as by the state and local governments.

Attention was also shifting Friday to whether the scale of the disaster could have been avoided. Congress is likely to open an investigation next week into what went wrong in Texas, and the state's legislature is expected to conduct its own hearings.

Abbott, Texas's governor, has consistently blamed the state's electric grid operator for a lack of preparation and has called on its leadership to resign.

But the operator - the Electric Reliability Council of Texas (ERCOT) - said Friday that it had little control over the power suppliers and could not force them to better prepare for extreme cold.

"We don't own the generation units. We don't own the transmission," said ERCOT chief executive Bill Magness in a video call with journalists. "It's not really our role to do winterization."

Independent authorities said it is up to the Public Utility Commission of Texas - which oversees ERCOT - to mandate that suppliers better prepare for extreme cold and penalize those that choose not to do so. Without such costs, experts said, the power suppliers will continue to neglect preparations, with predictable consequences.

"To save millions of dollars, the generators failed to weatherize, and the consequences are that people have died and it's cost the state many billions of dollars in repairs to our homes and our buildings," said Tom "Smitty" Smith, the former longtime director of the Texas office of Public Citizen.

The exact scale of the damage was still becoming clear on Friday. Karen Clark, co-founder and chief executive of Karen Clark and Company, a catastrophe modeling firm, said the bout of winter weather could cost $18 billion in insured losses, with the total economic damage likely to be higher. The damage was spread across 20 states, though most was in Texas.

Beyond the financial toll, there was the human one: The storms have killed at least 48 people since Sunday - including 30 in Texas, according to data compiled by The Washington Post.

Still, there were signs Friday that a halting recovery had begun. Millions of people who had lost power earlier this week had it restored by Friday, with ERCOT declaring in the morning that "operations have returned to normal" after days of rotating outages. Across Texas, Louisiana and Mississippi, the number of customers without electricity was down to about 300,000 as of Friday afternoon. 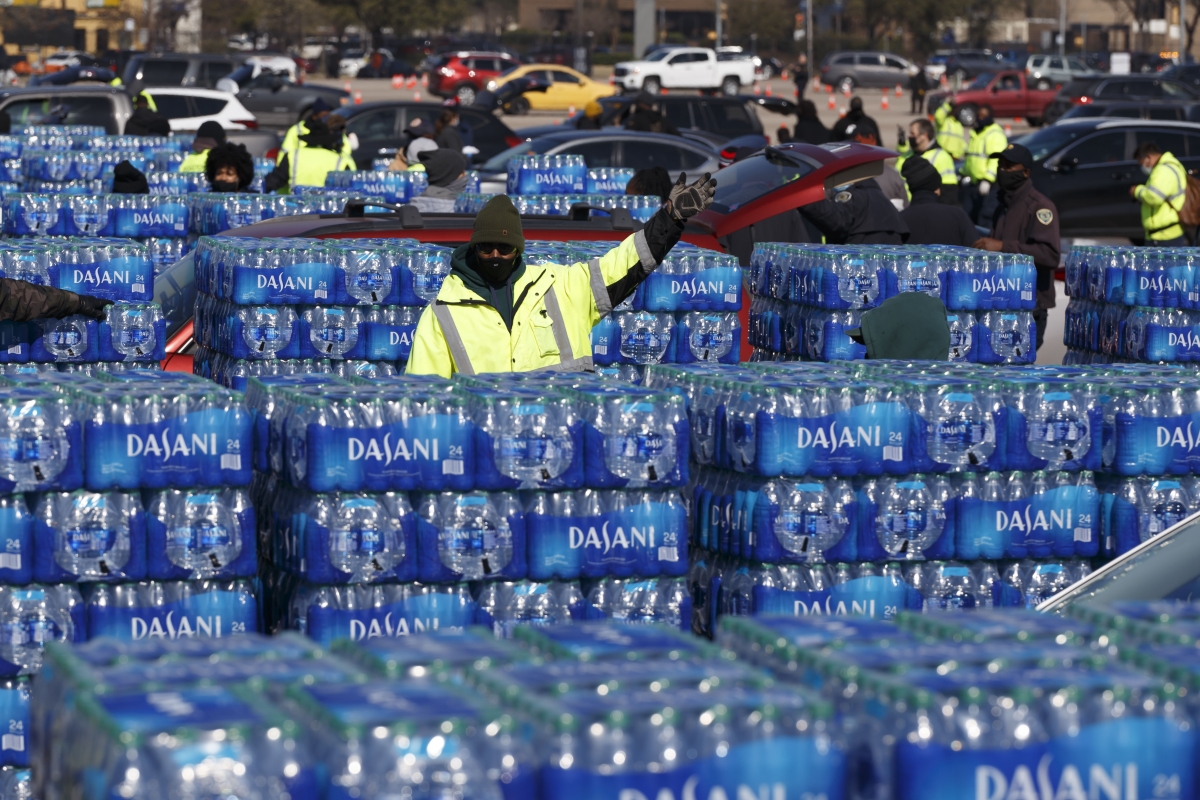 And after repeated blasts of Arctic wind - including one more moving in Friday night - the weather finally appeared poised to offer a respite, with temperatures forecast to climb Saturday and stay higher into next week.

But even with the thaw, peril lurked: The dramatic uptick in temperatures was expected to lead to potholes - and more burst pipes.

In Louisiana, Gov. John Bel Edwards, a Democrat, said Friday that authorities are "having to deliver bulk and bottled water to a big part of the state today" after nearly a million people were left without access to clean drinking water Thursday.

Edwards, who spoke during a Washington Post Live event, said temperatures were expected to hit record lows again late Friday, before several days of warming that he hoped would provide utility companies and authorities the opportunity to make extensive repairs to the state's water and energy infrastructure.

Louisiana's damage has been most extensive in Shreveport, located in the northwest part of the state.

"It's been a rough one for us," said Mayor Adrian Perkins, a Democrat, recounting how roughly six inches of sleet and snow made local highways so slick that even National Guard troops and tankers couldn't reach the city with fresh water until Wednesday night.

Power outages also continued to plague Mississippi on Friday, with one utility warning residents that it could take a few days for all the lights to come back on.

In downtown Tulsa, where hundreds of pipes had burst, the Chalkboard was hit with massive damage. Shannon Garner, who has owned the restaurant with her brother for nearly a decade, said she was still feeling shock and disbelief.

"The fire suppression system sprinklers just busted, and it was like it was raining in the kitchen," she recounted. "We ended up with five inches of water in the dining room, and it went down into our wine cellar."

The cumulative impact of the week's power cuts and burst pipes was forcing residents of Austin to take extreme measures, including posting to neighborhood Facebook groups and Slack channels rumors of where food and water could be found.

"It feels like it's just one thing after another after another," Austin Mayor Steve Adler, a Democrat, said Friday on NBC's "Today" show.

By 10 a.m. on Friday, at least 50 people armed with large plastic jugs, empty milk cartons and soda bottles were queued up for drinking water outside Meanwhile Brewery in South Austin, The scene was similar at a Natural Groceries store in north Austin, where people waited with mostly empty carts, holding pots, tea kettles and jugs to fill from the tap of a small sink labeled "kombucha rinse only!"

Brewery owner Will Jaquiss said that after its water was shut off Wednesday evening, the bar decided to give out all the potable water it had on hand, about 3,500 gallons. Staff shared 2,000 gallons on Thursday, including to four hospitals. The rest was swiftly doled out on Friday.

Nina Selzer Bellomio, a 47-year-old graphic designer who lives in northwest Austin with her two teenagers and husband, said she has been "harvesting snow, boiling it and using it to wash dishes. But the problem is we don't have much food."

The family moved from Boston in 2009, because her husband got a job in technology. At first, Austin seemed like a dream: cheaper housing, a vibrant counterculture and music scene.

But she said politics and the state's refusal to better regulate its energy industry had made Texans like her family "feel like we are back in time, doing sponge baths at the sink. Hauling buckets of water. It's like being a pioneer."

"I kid you not, the temperature was 22 degrees," she said. "And we thought we had good insulation."

The extreme conditions, she said, brought out the best in her neighbors.

"People were calling out for help, and amidst the sleet, the snow, the freezing cold, people were coming and helping each other," she said.

But Calcaben said the week had also exhibited the worst in politicians and others who are, at least in theory, responsible for protecting the public from the sort of deprivations on display statewide.

"The ones who are supposed to ensure our safety, they seem to get away with everything," she said.

That sort of anger was widespread in Texas on Friday, and it led some to predict that state leaders will have no choice but to initiate reform.

"Given the magnitude statewide of this crisis, I do think there will be changes," said Sherri Greenberg, who spent a decade as a Democratic Texas state representative and now teaches at the University of Texas's public affairs school.

But others were much more skeptical, given that any shift would probably require more aggressive government regulation - and higher upfront costs - in a state whose politics are dominated by conservative Republicans.

"The issue is Texas doesn't want to spend the money on an expensive weatherization package," said Jim Krane, an energy studies fellow at Rice University's Baker Institute. "There is no mandate."

Even with this week's disaster, that may not change. Any reports taking stock of what went wrong "are going to arrive when it's sunny, 87 and lovely," said Calvin Jillson, a political science professor at Southern Methodist University

"And people are going to say, 'Wow, that was terrible, but it's going to be really expensive to deal with that, let's think this through.' "