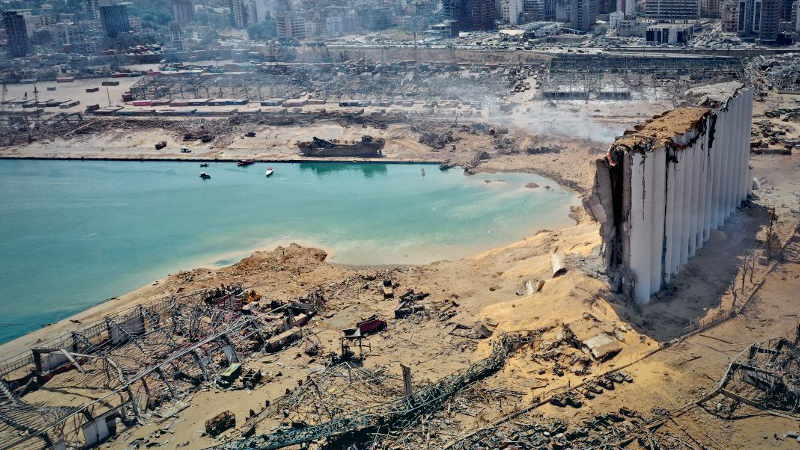 BEIRUT - The Lebanese judge leading the investigation into the August explosion that tore through Beirut had set his sights on the caretaker prime minister and three former ministers, charging them with negligence for ignoring the highly combustible material stored for six years on the waterfront.

But when two of the former ministers filed a complaint, alleging Judge Fadi Sawan had demonstrated a lack of neutrality by charging prominent figures to appease the public, he was dropped last week from the case. The Lebanese court that dismissed Sawan further questioned whether he could be impartial because his own home had been damaged in the blast - like those of hundreds of thousands of other Beirutis.

More than six months after the explosion, which killed more than 200 people, injured more than 7,500 others and devastated large portions of the capital, the official investigation is struggling to break through Lebanon's culture of corruption and political influence to hold anyone of consequence accountable.

Sawan had already brought charges against 33 people, placing 25 of them in detention, but most were low-level customs, port and security officials.

When he summoned caretaker Prime Minister Hassan Diab and two former ministers for questioning as defendants, they refused, claiming immunity from prosecution as public officials.

Throughout his investigation, Sawan had focused on a question that has gripped much of Lebanon since August: Who was responsible for allowing 2,750 tons of ammonium nitrate to be stored haphazardly in a warehouse, alongside fireworks and paint thinners, on the edge of a crowded city?

"I believe there was purposeful negligence," Diab said in an interview earlier this month at the Grand Serail, the prime minister's offices. Most of their windows were still covered with tarps, the glass yet to be replaced after it was shattered in the blast. "A blind eye has been turned for seven years," he added. Diab resigned after the blast but holds the role of caretaker prime minister until a new government is formed.

Although Diab has refused to be interrogated as a defendant, Sawan had succeeded in questioning him previously as a witness, and the focus had been on when he had first learned about the storage of the ammonium nitrate in Beirut. Diab, during the interview with The Washington Post, laid out the timeline he had provided under questioning, saying he initially heard about the material on June 3 of last year and brought the matter to the attention of the appropriate ministers. Diab said he had not realized how dangerous the material was.

Government documents reviewed by The Washington Post show that officials were well aware of the dangers posed by the large chemical stockpile long before last year. The documents reveal that responsibility for the ammonium nitrate was for years passed among different public and private entities, including the Public Works and Transportation Ministry, the judiciary, the army and even a private explosives company.

At least since 2015, a chemical expert made officials aware of the hazard of storing the chemicals at the port, and officials were advised to move the material out of the port.

A report by Lebanon's national security agency, which was sent to Diab two weeks before the explosion after he requested an assessment of the shipment, cited the expert at Lebanese University who had examined the material and warned, "if ignited, (it) would cause a massive explosion, one of whose results would cause the semi-destruction of Beirut's port."

Sawan's investigation had largely set aside questions surrounding how the ammonium nitrate arrived at the port and what caused the material to explode, according to Diab and lawyers who spoke to Human Rights Watch. The ownership of the ammonium nitrate remains unclear, as does how it ended up on a ship in Beirut's port in 2013. Local media have been probing a series of shell companies allegedly involved with the shipment.

While officials across sectarian and political lines have been calling for accountability, many of them rallied against Sawan once he charged the four senior officials in December. A week later, two of the former ministers he charged, Ali Hassan Khalil and Ghazi Zeaiter, filed a motion to the Court of Cassation to replace Sawan, and his investigation was paused. Khalil and Zeaiter have not addressed the merits of the charges against them, arguing instead that they are immune from prosecution.

The 26-page decision dismissing Sawan on Thursday said there was "legitimate suspicion" regarding his neutrality and impartiality, in part because the judge said he would not recognize the legal immunity claimed by the ministers. The question of how far legal immunity extends for public officials is hotly contested in Lebanon.

The decision also alleged that he covered up the failings of other judges, including at least one who had allegedly known about the dangers posed by the ammonium nitrate but did not act, and that Sawan could not maintain impartiality because his house was damaged in the blast.

Sawan has not made any public statements since being dismissed and did not respond to multiple requests for comment for this article.

On Friday, a new judge, Tarek Bitar, was appointed by the Minister of Justice to replace Sawan. Bitar will now have to restart the investigation.

"In a country dealing with decades of legal impunity and after months of pushing for the investigation to target high-level politicians, this is a major setback," said Ghida Frangieh, head of litigation at the Legal Agenda advocacy group.

Sawan's investigation was not without issues, said Aya Majzoub, a Lebanon researcher for Human Rights Watch. She said, for instance, that his use of pretrial detention of dozens of suspects without presenting specific charges or evidence against them violated their due process rights.

But Sawan's removal is a sign of the "red line" courts have drawn around politicians, Majzoub said. "What this policy of immunity has done is make the political class completely, completely unaccountable, perpetuating the culture of impunity," she said.

Immediately after the Aug. 4 explosion, tens of thousands of protesters angrily filled the rubble-and-glass-littered streets, demanding accountability. The protests pushed Diab to resign on Aug. 10. Three days later, Sawan was named as the judicial investigator.

Hours after Sawan's removal was announced on Thursday, families of the victims gathered in front of the Ministry of Justice.

The protesters held photos of family members lost in the blast, a sea of printed faces gathered around a burning tire. Several held out a banner that somberly demanded: "We want the results of the investigation with transparency before our patience runs out."