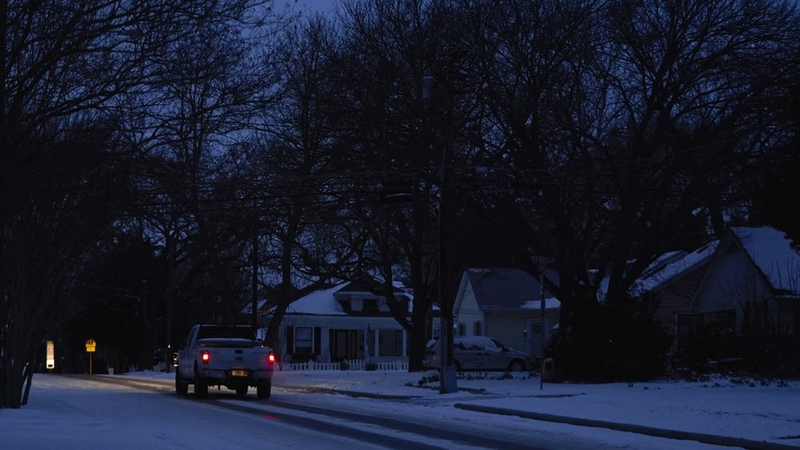 A truck drives down the street during a power outage in McKinney, Texas, about 30 miles north of Dallas, on Feb. 16, 2021. MUST CREDIT: Bloomberg photo by Cooper Neill

After a week of Arctic storms, hunger and cold, some Texans lucky enough to have power were handed another pain point: massive electricity bills.

Houston resident David Astrein, 36, a human resources director at a manufacturing company, said he's been charged $2,738.66 for 20 days this month, compared with $129.85 for the whole of January for a three-bedroom home with a detached garage. He and his wife stopped using their dishwasher, washer and dryer, and turned on as few lights as possible at night. They kept the heat on for their 5-month old son.

His bill for the month is set to exceed $3,000, according to his provider Griddy Energy.

Astrein is one of a swath of consumers facing sky-high payments after the storm, with many posting electricity bills as high as $8,000 on social media. According to their screenshots, most are customers of Griddy, a supplier with a unique business model.

The Macquarie Energy-backed company charges electricity based on real-time prices in wholesale power markets, therefore exposing consumers to the full swings. Griddy saw the problem developing and even urged its retail customers last weekend to switch to another provider. By Sunday last week, 20% managed to do so. But not Astrein.

"We were stuck with Griddy and those astronomical prices," he said by phone. "The failure in Texas as a whole to plan for this adequately is now a financial emergency for all of these customers on a program like Griddy."

For Griddy, that business model meant it got only a very small cut of Astrein's bill.

"I want to highlight that on the $2,738.66 total bill, Griddy only made $6.48," Chief Executive Officer Michael Fallquist said in a text message. "We only make $9.99 per month. All other charges are a pass-through."

But for some Griddy watchers, the furor comes as scant surprise after the scorching summer of 2019 also resulted in eye-watering bills. The phenomenon is unique to Texas, where the retail power industry is entirely deregulated.

Pulse Power LLC went a step further in trying to convince clients to conserve electricity -- it offered clients who curbed usage by 10% over three days the chance to win a Tesla Model 3. The raffle is set for the first week of March.

Rob Cantrell, the company president, said his customers, both commercial and retail, would see relatively limited increases in their bills.

"Customers on certain types of plans will be devastated, but almost all of our customers are on fixed plans, which will see a small increase for the month," he said.

CPS Energy, the city-owned gas and power provider in San Antonio, said on Twitter that it was looking at allowing customers to spread their payments over 10 years or longer. The plan wasn't received well, with angry comments ranging from "Ridiculous" to "Are you out of your minds?"

Texas Gov. Greg Abbott, R, held an emergency meeting Saturday with legislators on the issue. Rep. Michael McCaul, R, said Sunday that the current plan is to use federal assistance funding to help homeowners with both post-storm repairs, such as for water damage and pipe bursting, and surprise electricity bills.

Assistance from the federal government is "what Texans need right now so desperately," he said on CNN's "State of the Union."

But Houston Mayor Sylvester Turner, D, said the state of Texas should pay for the "exorbitant costs" of repairs and bills for consumers, in a Sunday interview on CBS' "Face the Nation."

State Attorney General Ken Paxton has already opened a probe into the power failures and issued civil investigative demands to companies including Griddy.

For now, the state's Public Utility Commission ordered retailers to not disconnect customers who haven't paid their bills, particularly on a Sunday.

In a Feb. 18 blog post, Griddy said the prices were sky high because the Public Utility Commission of Texas forced wholesale prices to $9 a kilowatt-hour, about 300 times more than normal.

"We know you are angry and so are we," the blog said. "We intend to fight this for, and alongside, our customers for equity and accountability."

Griddy said Friday it was seeking relief from the Electric Reliability Council of Texas, or ERCOT, and the PUCT for customers who were exposed to the high prices.

As power is restored in Texas, new websites have sprung up to help organize potential class-action lawsuits. At least four of the new domains signal the target may be ERCOT, which says it operates about 75% of the state's electricity.

Astrein plans to pay the bill out of his own funds, and on Sunday managed to switch providers. It will take up to 72 hours to take effect.