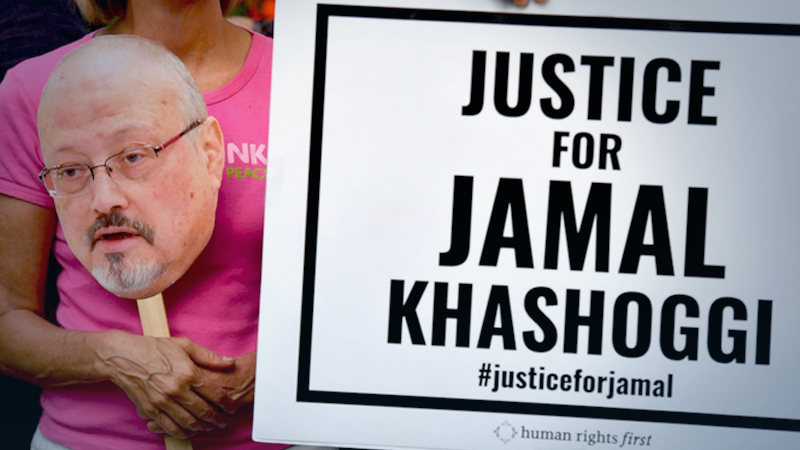 The Committee to Protect Journalists along with other press freedom and human rights groups hold a candlelight vigil in front of the Saudi Embassy in Washington on the first anniversary of journalist Jamal Khashoggi's murder, Oct. 2, 2019. Washington Post photo by Marvin Joseph.

WASHINGTON - The Biden administration will impose no direct punishment on Saudi Arabia's Crown Prince Mohammed bin Salman for the 2018 murder of Saudi journalist Jamal Khashoggi, despite the conclusion of a long-awaited intelligence report released Friday that he "approved" the operation, administration officials said.

"The relationship with Saudi Arabia is bigger than any one individual," Secretary of State Antony Blinken said at a news conference. By making public the intelligence report - withheld by the Trump administration for two years - and taking other actions, President Joe Biden has moved toward a promised "recalibration" of the U.S.-Saudi relationship, he said.

But for many lawmakers, human rights activists and Saudi dissidents, it was not enough.

The crown prince "should suffer sanctions, including financial, travel and legal - and the Saudi government should suffer grave consequences as long as he remains in government," said Sen. Ron Wyden, D-Ore., whose legislation in early 2019 mandated release of the report by the Office of the Director of National Intelligence.

Wyden was joined in those sentiments by a number of Democrats, although others spoke vaguely only of further "accountability." Few Republican lawmakers ventured a public opinion.

The Open Society Justice Initiative, which has been in court since early last year to force release of intelligence on the Khashoggi murder, said "the U.S. and other governments must take immediate measures to hold the Crown Prince and the Saudi government accountable for their flagrant disregard for the rule of law."

Senior administration officials sharply rejected suggestions that its decision not to sanction the crown prince was a continuation of President Donald Trump's cozy relationship with the Saudi rulers, and Mohammedin particular.

The United States, "as a matter of practice has not generally applied sanctions on the highest leadership" of countries with which it has diplomatic relations, said a senior administration official, who briefed reporters on the condition of anonymity under rules set by the White House.

"Having looked at this extremely closely, over the last five weeks or so, really, the unanimous conclusion is that there's just another more effective means to dealing with these issues going forward," the official said.

Barring unforeseen palace upheaval, Mohammed, 35, the grandson of the kingdom's founder and heir to the throne currently occupied by his 85-year-old father, King Salman, will soon be the absolute ruler of a major U.S. regional security partner, officials noted. The crown prince already serves as de facto leader of the kingdom in place of his ailing father.

At the same time Biden has expressed displeasure with the repressive Saudi monarchy, he has called the kingdom an important regional partner, saying the United States will continue counterterrorism cooperation and defensive assistance against regional threats, including Iran.

But the White House delayed Biden's initial call with Salman until a month after the inauguration and made clear it did not want his son on the line. Neither side mentioned whether the Khashoggi issue was discussed on the call, which took place Thursday.

Sanctioning Mohammed would place him on a short list that includes North Korea's Kim Jong Un; Belarusian President Alexander Lukashenko; Nicolas Maduro of Venezuela; Syria's Bashar Assad; and the late Robert Mugabe of Zimbabwe. It would be viewed in the kingdom as an enormous insult and make an ongoing relationship extremely difficult, if not impossible.

For the present, the administration has said it does not intend to deal with the crown prince in any capacity other than as Saudi defense minister, a position he also holds. He will not be extended an invitation to visit the United States any time soon.

In new measures announced Friday, the State Department imposed what it called "the Khashoggi ban," visa restrictions against anyone found to be "acting on behalf of a foreign government" and involved in "serious, extraterritorial counter-dissident activities." It said that 76 Saudi "individuals believed to have been engaged in threatening dissidents overseas, including but not limited to the Khashoggi killing," had already been listed.

The Treasury Department is also imposing sanctions on Maj. Gen. Ahmed al-Assiri, who served as a close aide to Mohammed as deputy chief of Saudi intelligence. He was fired from the post a few weeks after Khashoggi was killed and implicated by Saudi prosecutors in the murder plot. But the Trump administration, while sanctioning 17 other Saudi operatives, declined to list him, for reasons it never explained.

Responding to the released report, Saudi Arabia said that it "completely rejects the negative, false and unacceptable assessment pertaining to the Kingdom's leadership." A statement issued by the Foreign Ministry said the report contained "inaccurate information and conclusions."

But while it said "the Kingdom rejects any measure that infringes on its leadership, sovereignty, and the independence of its judicial system," the ministry also affirmed a "robust" and "thriving" partnership between Saudi Arabia and the United States.

The unclassified report, by the Office of the Director of National Intelligence (ODNI), confirmed classified conclusions reached by the CIA just weeks after the killing of Khashoggi, a Virginia resident and contributing columnist for The Washington Post.

The two-page report said the intelligence community based its conclusions on the absolute control the crown prince, known as MBS, had over decision-making in the kingdom, his "support for using violent measures to silence dissidents abroad, including Khashoggi," and the participation in the operation of his senior aides and security officials.

"We assess that Saudi Arabia's Crown Prince Muhammad bin Salman approved an operation in Istanbul, Turkey to capture or kill" Khashoggi, the report said. "Since 2017, the Crown Prince has had absolute control of the Kingdom's security and intelligence organizations, making it highly unlikely that Saudi officials would have carried out an operation of this nature without the Crown Prince's authorization."

As part of his review of relations with Saudi Arabia, Biden has cited Saudi human rights violations and political repression, the prosecution of the Saudi-led war in Yemen and the Khashoggi killing. He has already stopped the U.S. sale of offensive weapons used in the war against Yemen's Houthi rebels and paused for review all other weapons purchases by the kingdom, the world's largest customer for U.S. defense goods.

Release of the report marks the end of a long process that began when Khashoggi, lured to the Saudi Consulate in Istanbul to pick up documents, was drugged and dismembered by Saudi agents. His remains have never been found.

The CIA, based in part on intercepts of text messages and telephone calls, along with an audio recording of the actual killing, quickly contradicted the Saudi government's claims that the crown prince was not involved. After a classified briefing just weeks after Khashoggi's death, lawmakers said the evidence was irrefutable.

"If the crown prince went in front of a jury, he would be convicted in 30 minutes," then-Sen. Bob Corker, R-Tenn., told reporters.

But Trump, who had also been briefed, continued to insist there were no firm conclusions, asking, "Well, will anybody really know?"

Although his administration imposed sanctions on 17 Saudi officials with alleged direct involvement in the killing itself, Trump insisted that the U.S. security alliance and massive Saudi purchases of U.S. weaponry were more important than holding the top Saudi leadership accountable.

"We do have an ally, and I want to stick with an ally that in many ways has been very good," he told Fox News after hearing the intelligence evidence.

In the early 2019 measure introduced by Wyden, Congress demanded that the ODNI produce an unclassified report of U.S. intelligence conclusions, including names of involved Saudi officials at all levels, giving the administration 30 days to release it.

For the next two years, Trump ignored the law, while he and his son-in-law, Jared Kushner, the White House official in charge of the Saudi portfolio, continued to develop a close relationships with Mohammed.

The crown prince, during a 2019 interview with "60 Minutes," pointed out that the United States had never released "an official statement" implicating him. "There isn't clear information or evidence that someone close to me did something," he said.

Asked about the reported CIA finding, he said, "If there is any such information that charges me, I hope it is brought forward publicly."

Last year, on the second anniversary of Khashoggi's murder, Biden said in a statement that, as president, he would "reassess our relationship with the Kingdom, end U.S. support for Saudi Arabia's war in Yemen, and make sure America does not check its values at the door to sell arms or buy oil."

At her confirmation hearing last month, Biden's national intelligence director Avril Haines was asked whether she would release the ODNI report. She replied she would "follow the law."