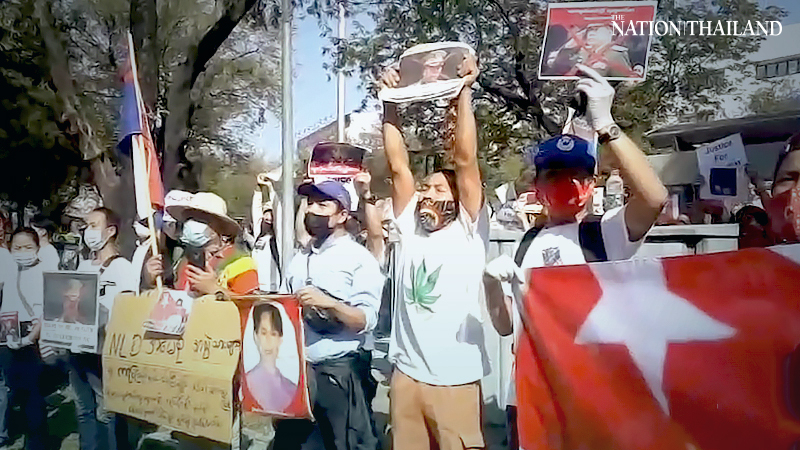 Myanmar's military has asked security forces responsible for deadly attacks on anti-coup protesters over the weekend not to use live ammunition as international condemnation grows.

The announcement was made in a broadcast on state-run MRTV after the Southeast Asian nation on Sunday saw its deadliest day since the Feb. 1 coup, with the United Nations saying at least 18 protesters were killed and 30 others wounded. The military also said Monday that more than 1,300 protesters were arrested during nationwide demonstrations.

"When it comes to crowd dispersal methods, security forces have been instructed not to use live bullets," the broadcast stated, accusing protesters of instigating violence by using slingshots and petrol bombs. "Security forces are allowed to protect themselves when protesters harm their lives by firing shots at the protesters below the waist."

It wasn't immediately clear that troops would use only rubbers bullets in their defense.

A new wave of rallies began Tuesday morning after a Myanmar court brought additional charges against detained civilian leader Aung San Suu Kyi that could keep her behind bars for an even longer period of time. The rising death toll may increase pressure on governments around the world to take more action against Myanmar's generals, who refused to recognize a landslide election victory by Suu Kyi's political party in November.

The call to refrain from using live rounds comes as foreign ministers in the 10-member Association of Southeast Asian Nations are set to hold an informal meeting Tuesday to discuss the situation in Myanmar for the first time since the coup. ASEAN has long followed a policy of nonintervention in the domestic affairs of its members, which include Myanmar, also known as Burma. It has thus far refrained from condemning the military for its actions or referring to the coup.

Thai Prime Minister Prayuth Chan-Ocha reportedly referred to it as a "political issue" that is "their country's matter." Indonesia, on the other hand, issued a statement Sunday calling on security forces to "refrain from the use of force and exercise utmost restraint to avoid further casualties."

"Instability in Myanmar ultimately creates danger for the rest of us in Southeast Asia, so it's not a purely Myanmar situation alone," Singapore Minister of Foreign Affairs Vivian Balakrishnan said during an interview on Monday with local television outlet Channel 5. "Although, as I said, the responsibility for resolving this lies with the authorities in Myanmar."