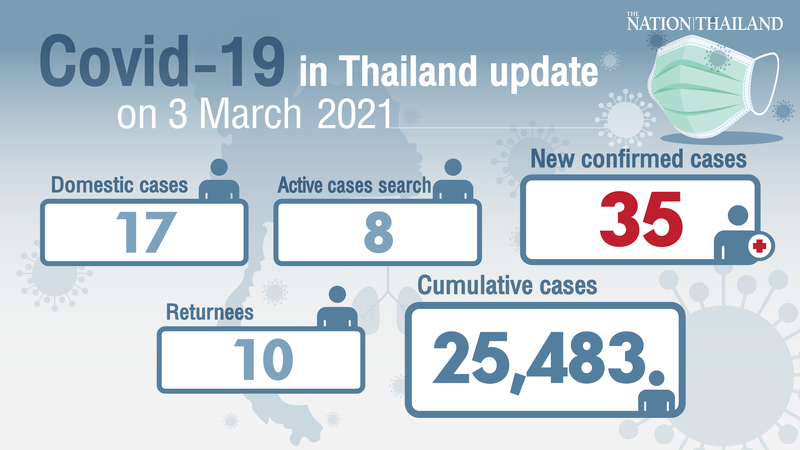 The Centre for Covid-19 Situation Administration (CCSA) on Wednesday reported 35 new cases, below the 100 mark for the 12th consecutive day, 10 of whom were returnees.

Of the 25 local cases, 17 had been exposed to the virus while visiting high-risk areas. Samut Sakhon led the list with nine cases, followed by three each in Pathum Thani and Bangkok and one each in Ayutthaya and Prachuap Khiri Khan.

Meanwhile, proactive testing led to the discovery of eight cases, five of which were in Pathum Thani and three in Bangkok.

Of the returnees, five were Thais returning from Turkey, Ghana, Kenya and Nigeria, as well as a Nigerian national who flew from his own country.

Also, four Thai women who were caught illegally crossing the Thailand-Myanmar border between February 23 and 25 tested positive on March 1.

Meanwhile, 63 patients have recovered and been discharged.

As of Wednesday, the number of confirmed cases in Thailand had risen to 26,108. Of these, 23,309 had been contracted locally, including 14,565 who were found via proactive testing, while 2,799 were returnees. So far, 25,483 have recovered and been discharged, 541 are still in hospitals, and the death toll remains at 84.