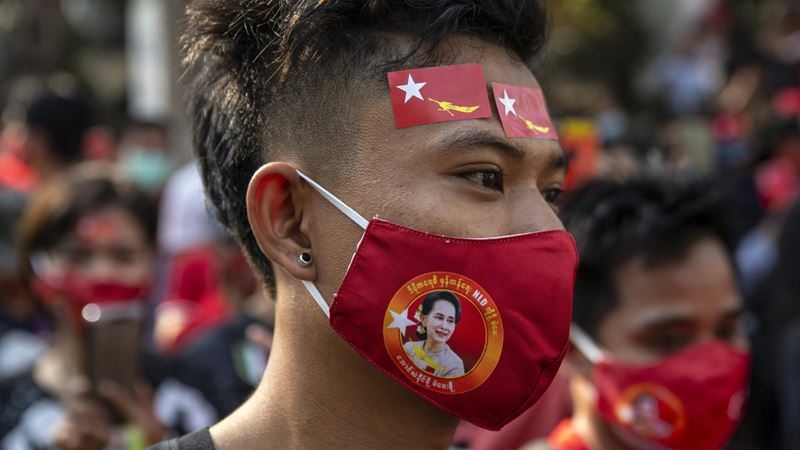 A demonstrator wears a National League for Democracy (NLD) party themed protective mask during a protest outside the Embassy of Myanmar in Bangkok, Thailand, on Feb. 1 2021. MUST CREDIT: Bloomberg photo by Andre Malerba.

As the U.S. looks to build a coalition to further punish Myanmar's generals, it is not having much success convincing governments in Asia to follow suit.

The standing of army chief Min Aung Hlaing's regime has slipped even further in the West after his envoy to the United Nations denounced the military takeover and Myanmar authorities killed at least 18 protesters on Sunday, the deadliest day since the Feb. 1 coup. While the junta has since told security forces to avoid using live bullets, reports emerged that protesters were still being shot with them. At least two more were killed on Wednesday in the city of Mandalay.

The U.S. has led the international pushback, with National Security Advisor Jake Sullivan saying the country was "coordinating closely with allies and partners in the Indo-Pacific region" and would take additional actions after imposing targeted sanctions on the coup makers. The U.K. also sanctioned the generals and the European Union has said its working on punitive measures.

Asian countries, by contrast, haven't taken any concrete action. While Indonesia has conducted shuttle diplomacy and Singapore has said its "appalled by the violence," no countries in the region so far have indicated they would support sanctions or any other measures that would hit the military's finances.

On Tuesday, foreign ministers of the 10-member Association of Southeast Asian Nations, which includes Myanmar, called "on all parties to refrain from instigating further violence" and for "a peaceful solution through constructive dialogue." While some individual ministers called for the release of Aung San Suu Kyi and a return to democracy, the statement didn't mention her by name and refrained from using the word "coup." It also said Asean, which is based on the principle of nonintervention, was ready "to assist Myanmar in a positive, peaceful and constructive manner."

Singapore Prime Minister Lee Hsien Loong separately said sanctions would only hurt the population at large and push Myanmar closer to those willing to talk to them like China.

"You can ostracize them, condemn them, and pass resolutions or not, but it really has very little influence," Lee told the BBC, according to comments distributed by his office. "We have to express disapproval for what is done, which is against the values of many other countries, and in fact a large part of humanity. But to say that I will take action against them, where does this lead?"

For Myanmar's generals, Asia's reluctance to join in U.S.-led sanctions or even cut them out of meetings effectively offers a diplomatic lifeline as they struggle to gain control of the country. Prior to Myanmar's opening about a decade ago, business ties with Asia allowed the junta to survive for years despite much broader Western sanctions than are currently in place.

Among Southeast Asia's 10 countries, two are run by military men who staged coups, two are Communist regimes with no elections, two have had ruling parties in power for more than two decades and one is an absolute monarchy. Malaysia, Indonesia and the Philippines are the only democracies that have seen peaceful transfers of power from one party to another in recent years.

Countries in Asia also avoided sanctioning Myanmar's generals over allegations of genocide against the Muslim Rohingya minority that forced more than 700,000 people to flee across the border into Bangladesh. An independent UN fact-finding mission found in 2019 that at least 59 foreign firms -- most from Asia -- had either joint ventures or commercial ties with the military, producing revenue that "substantially enhances its ability to carry out gross violations of human rights with impunity."

"In some ways, Asean allowed the military to get away with what happened with the Rohingya crisis and I think that they are faced with something more dangerous," said Bridget Welsh, honorary research associate at the Asia Research Institute, University of Nottingham Malaysia. "This is going to be much more difficult for them to wrestle with."

Myanmar's generals have made clear they have no intention of returning the nation to isolation, vowing to hold elections after a yearlong state of emergency. The junta has appointed Aung Naing Oo -- a familiar face to foreign investors -- as investment minister.

China and Thailand alone accounted for about half of Myanmar's trade in 2019, the latest year for which data is available, with the U.S. and Europe comprising roughly 13%. Asian economies represented seven of Myanmar's top 10 foreign investors as of January, led by China and Singapore, according to data from the Directorate of Investment and Company Administration.

Vietnam's Viettel Group, a state-owned enterprise operated by the Ministry of Defense, announced in 2018 that it was investing $1.5 billion to set up the mobile operator Mytel. Thailand's state-owned PTT, meanwhile, has imported natural gas from Myanmar for years via the Gulf of Martaban, and its exploration arm said last month it didn't expect the political situation to impact its operations or plans in the country.

Asean should take a clear stand particularly on avoiding more civilian casualties, according to Ong Keng Yong, a former secretary-general of the bloc. He likened Myanmar to a neighbor who infringes on the rights of nearby home owners.

"You can rearrange the furniture and setup in your home," he said. "But if that involves more use of scarce electricity and water resources, the others in the gated compound can have a say."