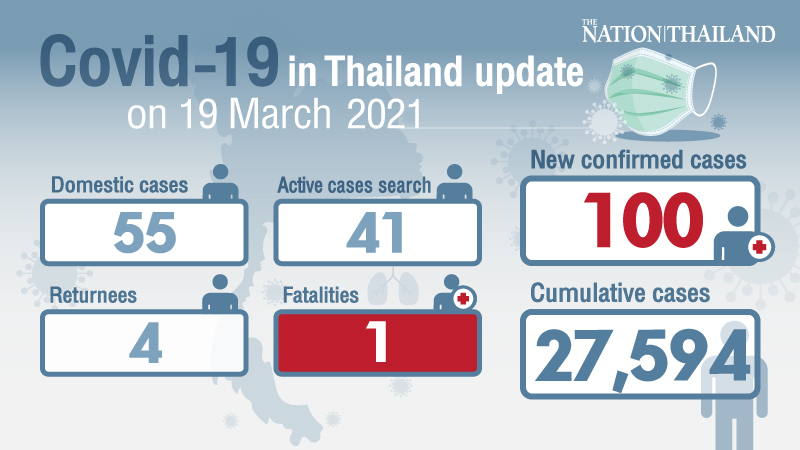 One fatality, 100 new cases reported, half of them in Samut Sakhon

The Centre for Covid-19 Situation Administration (CCSA) on Friday reported 100 new cases, four of them overseas travellers in quarantine facilities, and one death.

Of the 55 people exposed to the disease while visiting high-risk areas, 29 were in Samut Sakhon, 8 each in Bangkok and Phetchaburi, 4 in Samut Prakan, two each in Pathum Thani and Narathiwat, and one each in Suphanburi and Mukdahan provinces.

Also read:
Ban on splashing of water, powder or foam parties for Songkran

State of emergency extended until the end of May

Meanwhile, proactive testing led to the discovery of 41 cases -- 18 in Samut Sakhon, 14 in Bangkok, three in Pathum Thani, two each in Phetchaburi and Ayutthaya, and one each in Nakhon Pathom and Nonthaburi provinces.

Of the overseas travellers found to be infected in quarantine facilities, two Thais had returned from Japan and the United Arab Emirates, while a Dutch man and a French student had arrived from their respective countries.

73 patients have recovered and been discharged.

Meanwhile, a 53-year-old woman who had diabetes, myocardial infarction and pneumonia in Samut Sakhon became the 90th fatality since the outbreak. She developed cough, had breathing difficulties and lost her sense of smell and taste on January 29. The patient was taken to a private hospital on February 2 with Covid-19 disease detected before transfer to a hospital in Bangkok the next day. She died on March 17 after a blood infection was detected in the previous week.

As of Friday, the number of confirmed cases in Thailand had risen to 27,594. Of these, 24,633 had been contracted locally, including 15,365 who were found via proactive testing, while 2,961 were returnees. So far, 26,450 have recovered and been discharged, 1,054 patients are still in hospitals, and the death toll has increased to 90.