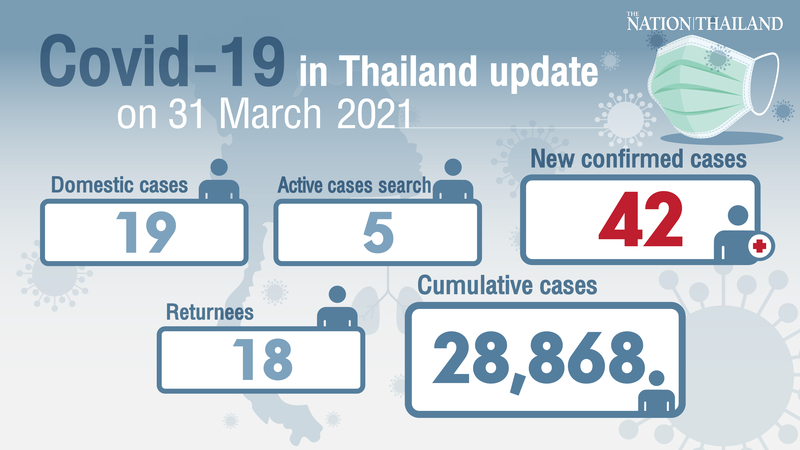 The Centre for Covid-19 Situation Administration (CCSA) on Wednesday reported 42 new cases, 18 of whom are returnees and illegal border crossers.

Of the total, 19 were exposed to the virus while visiting high-risk areas, with Bangkok and Samut Sakhon leading the list with eight cases each, followed by three in Samut Prakan.

Apisamai Srirangsan, assistant CCSA spokesperson, said the cases include a 28-year-old woman working in the kitchen of a Bangkok hotel being used as an alternative quarantine facility, who came in close contact with eight family members and workmates. The woman lives in Samut Prakan.

She tested positive on March 22 after developing a fever and losing her sense of smell and taste.

Health officials learned that her job at the hotel was serving food to quarantined people and taking out the trash. The patient confessed she sometimes forgot to wear gloves and clean her hands properly after taking out the trash. Officials are now tracing everybody she may have come close in contact with.

Proactive tests, meanwhile, have led to the discovery of five cases – two in Bangkok and three in Samut Sakhon.

Of the 18 returnees, nine are Thai nationals, two Filipino ship crew, and a traveller each from Pakistan, Holland, Malaysia, Britain and Canada. Two Thais were also arrested at Thailand’s borders with Malaysia and Myanmar on March 16 and found positive on March 27.

Meanwhile, 47 patients have recovered and been discharged. As of Wednesday, the number of confirmed cases in Thailand had risen to 28,863. Of them, 25,766 had contracted the virus locally, including 16,062 who were found via proactive testing, while 3,097 were returnees.

So far, 27,426 people have recovered and been discharged, 1,343 patients are still being treated, and the death toll remains at 94.