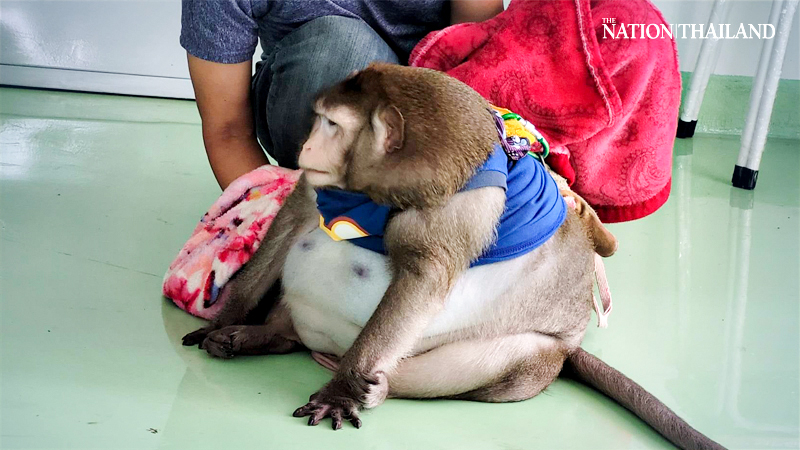 Doctors have expressed concern at the condition of a reporter who was bitten by “Godzilla”, an obese macaque who shot to online stardom after being seized from its owner last week.

The monkey had been kept by its owner at a market in Bangkok’s Minburi district, where it ballooned to over 20 kilograms in weight after being fed junk food by passers-by. An average full-grown macaque weighs only 10 kilos.

The Department of National Parks, Wildlife and Plant Conservation (DNP) decided to seize Godzilla from its owner last Thursday (March 25), concerned that the primate would die from obesity.

The day before (March 24), PPTV reporter Natcha Norphong visited the home of the monkey’s owner on a news assignment.

Natcha said that she had hugged herself to avoid handling the macaque at first. However, after the owner reassured her it was safe to touch her pet, she felt more comfortable. She decided to approach Godzilla, only for the animal to sink its teeth into her flesh.

The bite cut through to the bone, she added.

Now, doctors at Paolo Hospital Phaholyothin where Natcha is being treated are concerned about her condition. They report that her white blood cell count has dropped to 3,000/ml from normal levels of 4,500-10,000/ml and she cannot leave her bed.

No virus was found in her blood, but medics suspect Natcha may have contracted a bone infection.

PPTV has asked the DNP to check the monkey for viruses. There is no evidence that Godzilla has ever been vaccinated.

A DNP veterinarian pointed out that monkeys can carry rabies and tetanus.