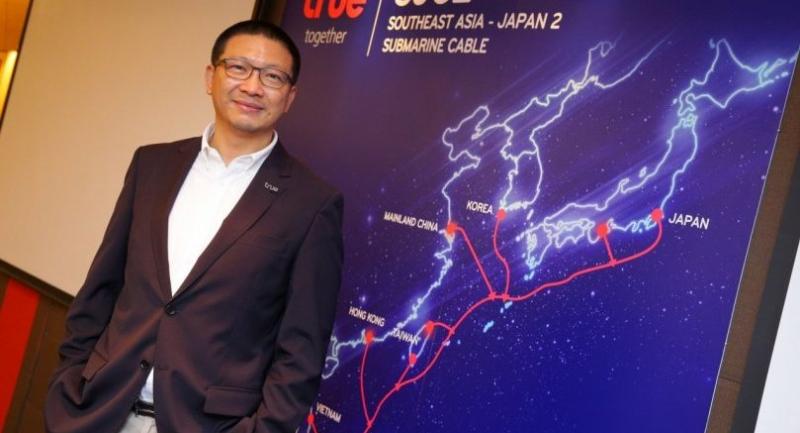 TRUE Corp group will spend around Bt3.6 billion on its co-investment with other members of the Southeast Asia – Japan 2 consortium (SJC2) to build a high-performance submarine cable that will connect Thailand with eight markets spanning Singapore to Japan.

The move is aimed at further strengthening the company’s international connectivity capacity and its overall telecom services offering.
The other countries and territories to be connected to the submarine cable are Cambodia, Vietnam, Hong Kong, Taiwan, mainland China and South Korea.
The consortium, in which True is one of nine members, last month signed an agreement with NEC Corporation to build the submarine cable. For True’s commitment, the company will spend about Bt3.6 billion on the network investment, said Supoj Mahapan, True's managing director of international carrier and alliance management.
The construction of this intra-Asian network will begin this year and is expected to be completed by the fourth quarter of 2020. The network lifespan is at least 25 years.
The SJC2 members are China Mobile International, Chunghwa Telecom, Chuan Wei, Facebook, KDDI, Singtel, SK Broadband, True Group, and VNPT.
The 10,500-kilometre cable has links to 11 cable landing stations in the region. The cable will feature up to eight pairs of high-capacity optical fibre with initial design capacity of 144 terabits per second, roughly the equivalent of simultaneously streaming 5.76 million ultra-high definition videos per second.
The True investment will enable it to utilise 9 terabits per second capacity on this planned network out of the network's total capacity of 144 terabits per second.
The higher capacity will allow True group to support high bandwidth intensive requirements such as video streaming, higher definition video, 5G, virtual reality applications, artificial intelligence, cloud services, analytics, robotics and the Internet of Things.
“The SJC2 submarine cable project is another significant step of True Group in building key infrastructure for True Group and Thailand,” Vichaow Rakphongphairoj, True group co-president, said yesterday. “It is our ongoing commitment to support the government's policy in relation to the nation's economic development.”
He said the submarine cable is one of several projects that will enhance Thailand's international connectivity and support the government's digital economy policy. The cable is deploying state-of-the-art technology and its high capacity will truly enhance True’s position as market leader in mobile and fixed broadband internet, Vichaow said.
Supoj added that the SJC2 network will add network diversity to Thailand. Currently, more than half of Thailand's Internet traffic is routed via land cables in Malaysia and Singapore.