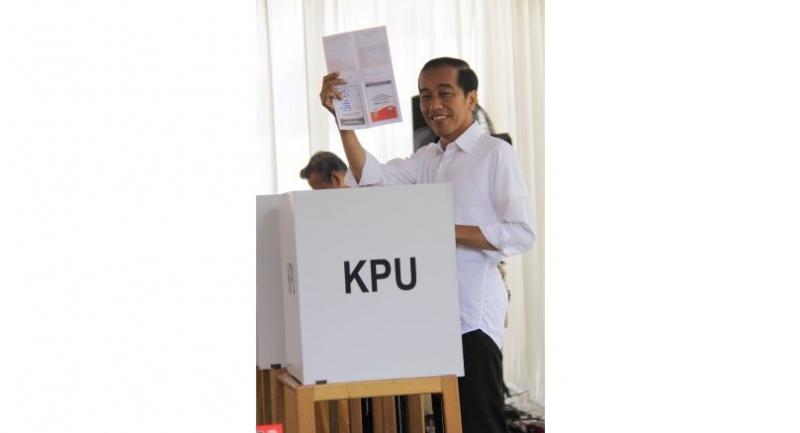 By Seulki Lee
Special to The Nation
Jakarta

Joko Widodo, Indonesia’s incumbent president commonly known as Jokowi, is expected to lead the world’s largest Muslim country and Asean’s most populous nation for another five years after 150 million voters gave their verdict in a peaceful nationwide poll last Wednesday.

“Today because [the incoming voting sample] is almost 100 per cent, we convey that the results of quick counts conducted by 12 institutions stated that Jokowi-Ma’ruf Amin received 54.5 per cent of votes and Prabowo Subianto-Sandiaga Uno received 45.5 per cent,” said Jokowi on Thursday.

Jokowi’s competitor Prabowo Subianto, who was running for president for a fourth time since 2004, proclaimed his victory earlier with 62 per cent of votes based on selected surveys.

The former Special Forces (Kopassus) commander’s claim of victory has, however, gone unacknowledged by the domestic and international community. The front pages of mainstream print media all reported Jokowi’s re-election a day after the poll.

The Election Commission is scheduled to announce the official result between May 23 and June 15, with a new government formed by September.

Jokowi’s choice of Ma’ruf Amin, leader of world largest Muslim organisation Nahdlatul Ulama(NU), as his vice-presidential running mate was calculated to tap the 90 million NU members, while Prabowo made his own appeal to Islamic conservatism by attending events such as the massive Defend Islam 212 rally in February.

“In sum, this election is a ‘race to the right’ or a race to show who is Islamic conservative. Therefore we didn’t see much debate on poverty, income distribution, inequalities between regions in Indonesia, and other ‘bread and butter’ issues,” said Made Supriatma, an Indonesian visiting fellow with Singapore’s ISEAS-Yusof Ishak Institute.

“Both candidates did not differ much on economic policies as they are believers in the free market,” he added.

Instead, Indonesia’s choice in the 2019 election has reconfirmed the country’s strong preference for a technocrat-style leadership, as the country strives for another development leap in the midst of low growth in the global economy.

“Previous local election results showed that voters want technocrats who can solve urban problems, and Jokowi was among the first batch or generation of such urban leaders who rose from local government level,” Philips Vermonte, head of Indonesian think-tank CSIS, told a forum on “Looking at Indonesia after the election”.

“Although identity politics rose in this year’s election, I hope the competition between local leaders to showcase themselves as a better technocrat can quell identity politics,” Vermonte added.

New level of challenges for Jokowi

Jokowi’s second term will be another chance to correct his negative track record on rights issues including human rights abuses, persecution of minority groups, and development injustice caused by his signature infrastructure drive.

“This election was a war of access to money and resources, not a competition of value and vision. In Jokowi’s five-year term, people’s rights were denied. But Jokowi has a constitutional mandate as president to seek justice for victims of human rights violations,” said Hariz Azhar the founder and chief of newly established law and human rights advocacy organisation Lokataru.

“For me, whoever wins doesn’t matter as both of them have been sitting on the impunity in their own track records. My demand for a new president remains the same. Do not politicise past cases of human rights violation – make the investigations judicial,” said 67-year-old rights activist Maria Cataria Sumarsih in Jakarta. Her son, Benardinus Realino Norma Irawan, was among the victims of the three so-called Semanggi I, II and Trisakti Tragedies, in which the army gunned down protesters demanding implementation of a six-point reform agenda after the fall of Suharto in 1998-1999.

In his first term, Jokowi was widely criticised by rights groups for appointing to key government posts retired generals who are accused of abduction, forced disappearance, shooting and torture of civilians during and after Suharto’s fall in 1998.

Indonesian and international media have focused on General Prabowo as one of the key decision-makers in the military’s brutal counter-action against civilian protests in Indonesia and independent movements in Timor-Leste.

Sumarsih didn’t vote for either presidential candidate, instead holding her 582nd Thursday (Kamisan) rally in front of the presidential palace for justice and an end to impunity, a day after the election.

“We have to remember that Jokowi is the first civilian president who survived five years in office and he will serve another five years. This is a huge achievement for a civilian president [in this region],” commented Supriatma of the ISEAS-Yusof Ishak Institute. “But he cannot do it without support from military elites – both active-duty and retired generals. In Indonesia, the military is still a very influential political force.”