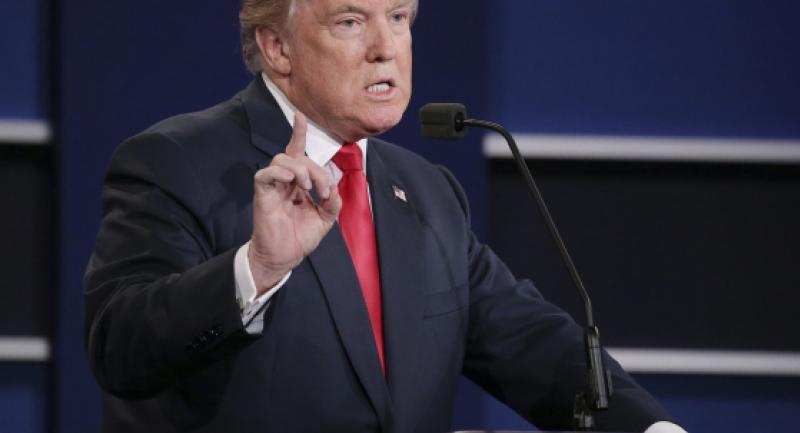 President-elect Donald Trump seen during the final presidential debate at the University of Nevada-Las Vegas in Las Vegas, on October 19. //EPA

Authoritarian regimes and dictators around the world must feel vindicated by the just-concluded presidential race in the United States, the one-time champion of liberal democracy that had the habit of exporting if not imposing its political system and the accompanying values to the rest of the world.

It is not so much the final outcome of last week’s race as the entire democratic process that is being questioned or scrutinised in and outside the United States.

In the run-up to the November 8 election, spectators of American politics were served with the tale of a contest between two candidates, both with problematic backgrounds and flawed characters.

More negative revelations about the candidates emerged as election day neared to raise serious questions about the credibility and competency of whoever is elected to lead the world’s most powerful country.

The American media had rightly, if not unkindly, described this as an election where voters had to choose between the lesser of two evils. When that choice fell on Donald Trump rather than Hillary Clinton, there was more indignation, both at the outcome as well as the electoral process.

What went wrong with the system, many people asked?

Is the American electoral system failing that we should question its effectiveness and efficiency in picking national leaders? Or are we seeing signs of fatigue in the system that has evolved in the last two centuries?

To describe this as a systemic breakdown of the electoral process would probably go too far, and would give pretext for countries to conveniently discard or to forget liberal democracy.

May be it is worth recalling that just eight years ago, the same system gave America its first black president in Barack Obama, who was re-elected in 2012. This year, the same system almost produced the first US woman president.

Still, the 2016 American presidential race, from the process to the final outcome, gives plenty of ammunition to those who doubt about the ability of liberal democracy in producing great leaders. The timing could not be worse, coming as the US superpower status is waning, through a combination of its own failing strengths and the rise of China challenging America’s supremacy.

Liberal democracy a la America had its strong appeal in recent history when it seemed to be the natural or only course for any nation to follow. Theories were postulated about the first wave, second wave and third wave of democracy. There may not be a fourth wave, at least not until nations are convinced that this is really the best way to move forward.

Because it is a system that has proven efficient and effective, and certainly delivered the economic goods, it is now being touted as the better option than liberal democracy for developing countries looking for the right kind of nation-building model, including in the way they pick their leaders.

One caveat about the China model, however: Forget freedom and basic rights, the fundamental tenets that underpin liberal democracy.

What matters is that the system brings economic growth and development and raises people’s prosperity. The suppression of some freedoms and rights – big or small is relative – is the price nations have to pay to ensure stability, a prerequisite to development. Freedoms and basic rights can come later, if at all.

In “The China Model – Political Meritocracy and the Limits of Democracy” (2015, Princeton University Press), author Daniel A Bell shows how China introduced a meritocratic system that has produced leaders the nation can be proud of. The leaders that have come out of this system have consistently produced rapid growth rates that turned China from a large, poor developing country to the second-largest economy in the world in these last two decades.

The system still ensures periodic changes of national guard to prevent China from becoming a dictatorship. It offers a degree of predictability to ensure stability, a factor sorely missing in liberal democracies.

It is not a perfect system by any measure, but it is a model that has evolved in China out of the socialist system that the founding fathers of the People’s Republic of China launched in 1949.

But if countries are not comfortable with the costs to freedom and basic rights that the China model entails, they should probably take another look at US democracy, and consider 2016 as an aberration rather than a system that is failing, a system that is suffering from fatigue and needing reforms.

Americans need to look at the role of political parties and the way they produced presidential candidates. Surely a country of 320 million people deserved better choices than Trump and Clinton. How did their track records and flawed character get past the political screening system is simply baffling.

The US electoral system – including the primaries and the conventions – is simply too long and too expensive for any country to emulate. For that price, Americans should feel they are being shortchanged by the system.

This year’s voter turnout, estimated at 58 per cent, is another reflection of the growing public apathy towards the electoral system or the candidates it produced.

The 2016 American presidential race saw the ugliest and most divisive campaigns ever seen that inevitably would leave behind a sour taste, even if Clinton gave a gallant concessionary speech.

The US election has become one big and long political show of selecting the most popular, but not necessarily the most capable candidate. One could compare it with American Idol, but even this reality TV show has been pulled out due to viewer fatigue.

If this is the picture of democracy, then many nations around the world would want none of it.

The US electoral system actually has built-in self-correcting mechanisms such as the two-term limit and various institutional checks-and-balances to prevent the emergence of a despot. The First Amendment, and the independent media, ensure that people will always have the right to speak up and to be heard, even if they have made the wrong choice.

But these may not be enough to restore the faith in liberal democracy in producing great leaders. This faith has further waned after the 2016 US presidential election. One could also throw in Brexit – Britain’s referendum vote to leave the European Union – as another product of a democratic exercise in the Western world that has gone wrong.

In many countries, liberal democracy is no longer considered the best political system in selecting national leaders. It is not the only way forward. The China model has never been a more attractive alternative in some countries, including Indonesia, still grappling with nation building.

America can help restore faith in liberal democracy by carrying out the necessary electoral reforms. It needs to show once again that democracy is the best political system in selecting leaders because it is based on the principles of respecting freedom and basic human rights.

Yes, America can be great once again. But probably it would be asking too much from the new elected president.

Endy Bayuni is editor-in-chief of the The Jakarta Post.