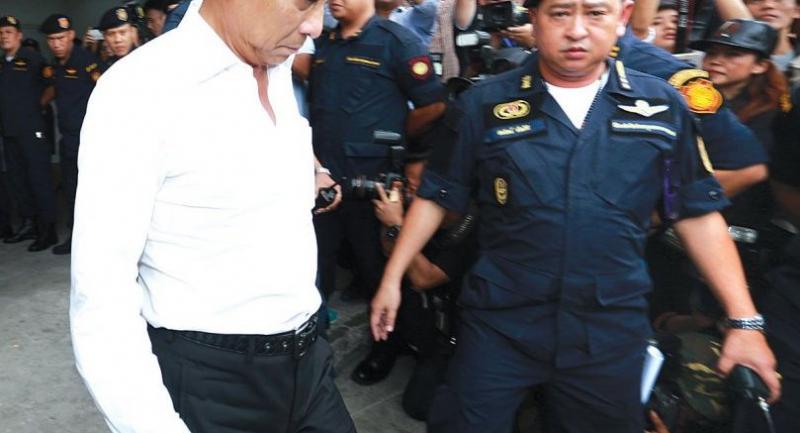 Boonsong suffers the fate of the ‘hired gun’

While Yingluck Shinawatra is now safely out of reach of Thai justice, her subordinates tumble into jail

Public and media attention over the past week has been riveted on former prime minister Yingluck Shinawatra’s
disappearing act and the matter of who should be blamed for her apparently easy escape from justice, as well as from the country. A politician of lesser importance appears to have been forgotten in the chatter, even though he is also a key defendant in a case that also stems from the Yingluck government’s rice-pledging scheme.
Last Friday the Supreme Court’s Criminal Division for Political Office Holders found former Commerce minister Boonsong Teriyapirom guilty of malfeasance in his involvement in fraudulent deals to sell rice from Thai government stocks to Chinese companies claiming to
represent the Chinese government. It was found that the foreign firms did not represent their government at all, and that the rice claimed to have been sold to China was never exported. Boonsong was sentenced to 42 years in jail.
Suranand Vejjajiva, his close friend and colleague in the Pheu Thai Party, wrote on Facebook that same day that, while most people would be focusing on Yingluck, he preferred to write about his friend Boonsong. Suranand offered Boonsong his sympathy while implying that the latter was maintaining some political secret. “In politics, some stories must ‘die with us’. We cannot talk about them. I understand this well and I sympathise with my friend, who is bound by that ‘condition’. I may be luckier than him in that I can still be myself, while my friend is not as lucky as I am.”
Suranand said he’d occasionally met Boonsong while the latter was serving as Yingluck’s commerce
minister and had noticed “signs of worry in his eyes”. He felt something was troubling his friend’s mind. He said he reminded Boonsong that they were both only “clerks” with no knowledge of the ins and outs of the stories behind the scenes. Suranand said that, after the 2014 military coup, he asked Boonsong to tell him “how the story goes”. Boonsong’s reply was, “I can’t talk about it.”
On the day the Supreme Court delivered the verdict against Boonsong and others in the same case, several hundred people were gathered outside. But most of them – if not all – were there to offer moral support to Yingluck, not Boonsong. They gathered at the court despite Yingluck urging them, in a Facebook post the night before, not to come. Boonsong was offered no such level of sympathy, and nor was his
ex-deputy, Poom Sarapol, or other co-defendants in the case. All of them had been bureaucrats involved in the fake government-to-government rice sales and all received lengthy jail sentences for malfeasance.
This could be an example of the inequality that undermines Thai society, in which people of higher status tend to be given privileged treatment. More senior people often manage to get away with – or flee from – their wrongdoing, while their subordinates end up punished for the same crime. We often see political bigwigs opting to flee the country to escape the reach of the law, leaving their junior accomplices behind to face punishment. It’s just like in contract killings, where the hired guns are the ones arrested and punished, while the ones doing the hiring get away scot-free.