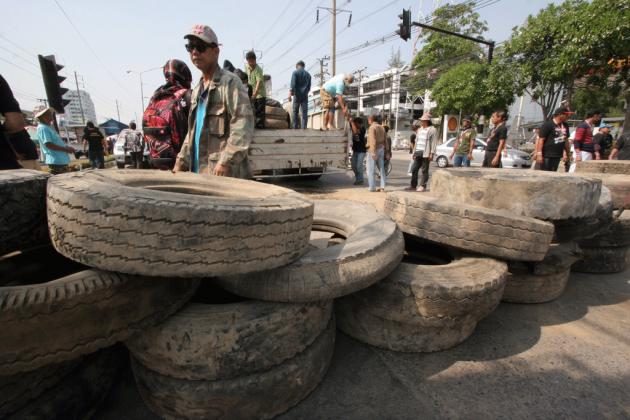 City put under state of emergency for 60 days

THE CARETAKER cabinet yesterday imposed an emergency decree covering the capital and its outskirts for 60 days. This will give officials more power to handle the anti-government protest, which it claims has been a cause of violence, death and injury.

From today, the entire capital and Nonthaburi, plus parts of Pathum Thani and Samut Prakan will be under emergency law.
To enforce the decree, the authorities have set up a so-called Centre for Maintaining Peace and Order (CMPO), replacing the Centre for the Administration of Peace and Order, to keep order.
Caretaker Deputy Prime Minister Surapong Tovichakchaikul will supervise the CMPO’s policies, with caretaker Labour Minister Chalerm Yoobamrung as director in command of the centre. Police chief General Adul Saengsingkaew and the Defence Ministry’s permanent secretary Nipat Thonglek have been named as operating directors.
The decision to impose the decree was made by caretaker Prime Minister Yingluck Shinawatra and some members of her Cabinet, including Surapong and Chalerm, sources said. In a sign of possible disagreement, there were only military representatives instead of commanders present at the meeting yesterday, sources said. With a lack of military chiefs at the centre, the police under Adul will be at the frontline.
Yingluck said she had instructed operations officials to exercise utmost restraint when handling the protest. Asked if the situation would turn violent, like in 2010, she said the government would mostly have the police force overseeing operations. Protesters should not be worried, as police would operate in accordance with law.
“If the soldiers are put under police command, it will be problematic,” academic Panitan Wattanayagorn said. “I have never seen troops being placed under police [control].”
Surapong reasoned that the emergency decree was necessary given that protesters led by Suthep Thaugsuban had violated the law, raided government agencies and state banks, as well as threatened state officials. Violent incidents were intentional and meant to hurt and kill people, he claimed.
Since the anti-government protest began in November 30, at least nine people have been killed and 554 injured.
The foreign minister said that diplomats and representatives of the international community would be briefed about the situation and the consequences of the emergency decree.
Meanwhile, hardliner Chalerm said he would call a first meeting today to map out an operation plan to handle the current situation as well the February 2 election. He said that the police would not hunt Suthep but wait for him to surrender.
The decree authorises the authorities to announce a curfew, limit people’s movement and even censor the media, National Security Council secretary-general Paradorn Pattanatabutr said earlier.
Officials operating under the decree would get some immunity from legal consequences under the Penal Code, he said.
The emergency decree was declared at about 6.30pm last night at a press briefing instead of a live TV broadcast, as is usual.
Suthep said it was unnecessary for the government to invoke the emergency decree, as this was not an emergency situation. “Protests have continued peacefully over the past three months. We will defy the emergency law,” he said.
Earlier, caretaker Prime Minister Yingluck Shinawatra said she did not want to resort to using force to control the situation, deputy government spokesman Parkdehans Himathongkom said.
At present, police and security officials are carefully monitoring rally sites, and not allowing any weapons to be smuggled in, he said.
Yingluck also expressed sympathy for officials who were intimidated, humiliated and harassed by protesters, while the Centre for the Administration of Peace and Order (CAPO) yesterday denounced the protesters’ hostile behaviour against a senior official at the Department of Special Investigation.
DSI chief Tarit Pengdith, who is also a member of CAPO, said it was not acceptable that protesters led by the People’s Democratic Reform Committee stormed into the Software Park and belligerently demanded that DSI officials stop working. The protesters also chained the office doors shut on Monday.
Tarit told a press conference that was broadcast live on TV that the PDRC leaders and security guards had set a bad precedent for society by cornering Pol Colonel Nirand Adulsak, chief of Special Cases Division 1, and scaring and scolding him.
Chumphon Junsai, a PDRC leader, led the mob to surround the building to block DSI personnel from working.
Tarit said that they had also gone there believing he was inside. The protesters’ verbal assault forced Nirand to wai the PDRC leaders and guards, begging them not to hurt him, Tarit said. The act was a serious crime and needs to be condemned, he said.
He noted that Nirand could have used a gun to defend himself, but chose not to do so for fear of causing deaths and injuries.