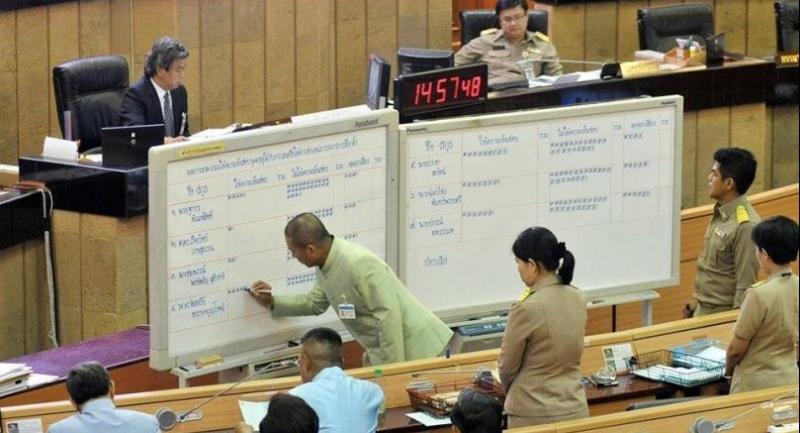 THE NATIONAL Legislative Assembly (NLA) yesterday voted behind closed doors to endorse five of the seven candidates proposed to become new members of the Election Commission (EC), which will take charge of planning the upcoming election promised for next February, the first in five years.
According to the new organic law governing the agency, the commission will comprise seven members. Two candidates – Somchai Channarongkul, the former director of the Cooperative Promotion Department at the Ministry of Agriculture and Cooperatives, and Peerasak Hinmuangkao, the former governor of Buri Ram province – did not make the cut in yesterday’s vote.
The two got three and 28 votes respectively, while the law requires that successful candidates be endorsed by a simple majority vote – or 124 votes of the 246 NLA members.
The five candidates to win endorsement from the legislature after three hours of deliberations were: Suntud Sirianuntapiboon, Ittiporn Boonprakong, Tawatchai Lertpaothai, Chatchai Chanpraisri and Pakorn Mahannop with 178, 186, 184, 184 and 185 votes respectively.
Suntud, an environmental technology professor, is the only candidate from the academic sphere. The rest are former government officials. Ittiporn was the former director of the Treaties and Legal Affairs Department at the Ministry of Foreign Affairs and Tawatchai was the former governor of Saraburi province.
Chatchai and Pakorn, meanwhile, are Supreme Court judges nominated by the court assembly for the EC posts.
The shortlisted candidates were scrutinised closely by the selection committee to ensure the EC members had the required credentials. Reportedly, Somchai had missed the post for allegedly being involved in the Klongchan Credit Union Cooperative scandal, while Peerasak had been questioned over his political impartiality – a quality crucial for an EC member.
With five candidates making it through the selection, the EC is still left needing to fill two vacancies. NLA whip secretary Somchai Sawangkarn said that the selection committee would have to find new candidates for the NLA to endorse to fully constitute the EC, as required by the organic law.
However, NLA vice president Surachai Liangboonlertchai had said on Wednesday, before yesterday’s vote, that five working commission members were enough for the quorum and could make decisions.
If the vacancies posed issues that affected the EC’s work, Deputy Prime Minister Wissanu Krea-ngam said on Wednesday that the former commissioners could remain in office and serve as caretakers until the problems were sorted out.
Former EC member Somchai Srisuthiyakorn said that in the meantime, successful candidates had 30 days to resign from any positions they currently occupied so the process of voting for the president could begin, as well as seeking Royal endorsement. Somchai reiterated that five commissioners were sufficient to make a quorum.
The current EC members were controversially dismissed when the new organic law took effect last year. Despite strong criticism, authorities argued that the new legislation gave more power to the agency, resulting in the need to fill the commission with members boasting higher qualifications.
The process to select the remaining two vacancies could take up to five or six months, Somchai said.
Some sources said the selection committee could be proactive and themselves approach potential candidates rather than waiting for applications. But Somchai said this could present a transparency problem and authorities should think hard about it.
This was the second time the NLA had voted on a shortlist of candidates. The first attempt last February saw all candidates being turned down by the legislators.