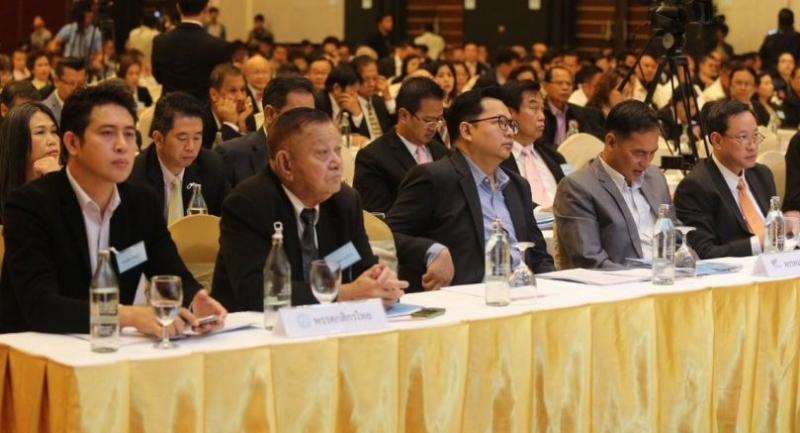 EC under microscope for gerrymandering over designing of boundaries

THE ELECTION COMMISSION (EC) yesterday faced difficult questions over the design of constituency boundaries and whether boundary gerrymandering is at work after the junta issued an order allowing the agency extra time for the process.

The electoral boundary drawing was a burning question in yesterday’s meeting between the EC and political parties. The meeting’s stated aim was to guide politicians through new rules and regulations in preparation for the first election in five years.

But Chusak Sirinil, head of Pheu Thai Party’s legal team, yesterday expressed discomfort over the junta order that legalises any decisions on constituency mapping by the EC no matter whether they were in line with the existing laws.

“Pheu Thai would like answers from the EC – will you really go against the law and disregard electoral laws?” the lawyer asked. “The junta order obviously suggests and opens way for the EC to do anything.”

He went on to say that there was no other way to look at it, but as an intervention by the junta to tamper with electoral boundaries. Mapping constituencies is one of the fundamental issues in an election, Chusak said. If it is not done freely and fairly, it is impossible to believe that the whole voting process will be free and fair, he said.

This is especially worrisome given that the National Council for Peace and Order (NCPO) has been involved with some political parties, Chusak said. All these moves could be considered something they did for their own political gain, he added.

“Pheu Thai would like an answer on how the EC will go about this. We hope you uphold justice and draw constituency boundaries according to the law,” he said.

The concern began looming after the NCPO ordered an extended timeline for the EC to design electoral constituencies and have a final say on the issue regardless of complaints. It was previously reported that the EC had already completed the task. Some politicians and critics now fear that the boundaries would be changed to favour pro-junta parties.

Pongsri Tharaphum, the Democrat Party’s registrar, chimed in yesterday to say that if the boundaries had been changed and showed irregularities, it would petition the EC to review its decision.

The EC has been working on drawing constituency boundaries over the past couple of months. The agency put three different options for each electoral area before public hearings. Since the junta order was issued, rumours are circulating that a fourth drawing had emerged in many areas.

Gerrymandering is a serious threat for political parties. If a party’s stronghold is separated into two constituencies, for instance, then that party could lose the election in one or both of those constituencies.

Prayut Siripanit, Pheu Thai Party’s head of the Northeast, has already reported an instance of what he charged amounted to gerrymandering.

The 17 sub-districts of Maha Sarakham’s Kosum Phisai cistrict, have been divided into two constituencies, he said. One had 10 sub-districts and the other had seven and the change would have impact on Pheu Thai candidates running in the area, he charged.

Prayut said he would call on the EC to look into the issue today.