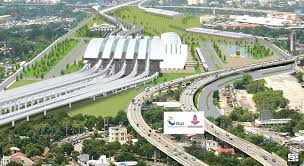 He added that three firms, CPN, BEM, and Ch Kranchang, who is major shareholder of BEM, had bought the terms of reference (TOR) from SRT between April 9 and May7. “I believe that two groups will bid to develop the 32 rai slated for the commercial area,” he said.

Under the terms of the TOR, the development must be a mixed-use project combining retail, hotel and office accommodation.

The contract to develop this project will fall under the public-private partnership act and follow the build-operate-transfer or BOT concept, meaning that the private firm has to design the project, raise the capital to develop it and manage the project once built. The contract will cover 34 years: the first four years for construction and the remaining 30 to manage the project, after which it will be transferred to SRT, he said.

“CPN has long experience in developing commercial areas while BEM is interested in diversifying its business. We believe that the both firms will join the bidding today,” Worawut said.

SRT expects this project will be completed in 2021, around the same time as Bang Sue Grand Station commences operations.

SRT has already started the building of Bang Sue Grand Station and also has a master plan to develop 2,325 rai as a smart city complex featuring commercial buildings, a sports complex, an international exhibition centre and residential estates. The project has an estimated investment value of Bt150 billion. Property firms have been developing residential and commercial projects around this location since 2017.

According to a survey by property agency Knight Frank (Thailand), at the end of the first quarter of 2018, 32,000 condominium units had been launched in the Bang Sue-Tao Poon area with a total value of some Bt100 billion. Up to 95 per cent of this stock has been sold. 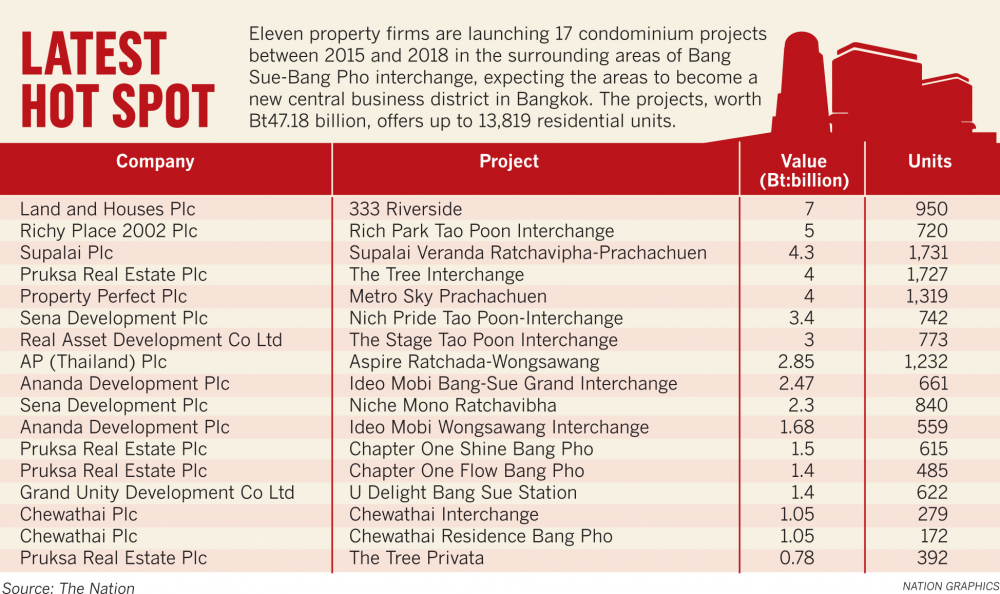 “If the Bang Sue Grand Station project proceeds in line with the master plan, we believe that this will drive strong demand for residential properties in this location,” Phanom said. “However, the government also has to develop a road system to link with the rail system. This is the way to drive Bang Sue to become a new CBD for Bangkok.”

According to a survey by The Nation, 11 developers are launching 17 projects worth a total of Bt47.18 billion between 2015 and the final quarter of this year. Of the 13,819 units, many have been sold and transferred to buyers while others will be handed over between 2019 and 2020. Some developers have reported sales of over 70 per cent of their respective project’s value.

“We expect strong demand from home-buyers for residential units in Bang Sue, Bang Pho and Tao Poon due to their proximity to the mass transit routes and workplaces,” he said, adding that all units in the company’s condominiums have been sold.

According to the master plan to develop Bang Sue Grand Station, the commercial area is the first phase of a project and will cover 32 rai. 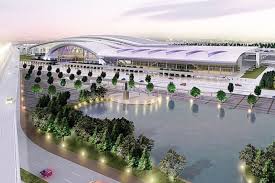 The second phase on the remainder of the land will include a centre to serve the meetings, incentives, conferences and exhibition (MICE) sector, a sports complex, and retail, office and residential projects around the station and will be developed from 2024 to 2029. Under the third phase, more housing projects will be built from 2029 to 2031. The master plan was drafted by Thailand’s Transport Ministry and its Japanese adviser.

Under the plan, Bang Sue Grand Station will become a new central business district (CBD) in Bangkok, alongside the Sukhumvit and Silom areas. The station will be a key link in Bangkok’s mass transit system. It will serve existing rail systems such as BTS Skytrain, the MRT, and the Airport Rail Link as well as the 10 new rail systems to come and three high speed routes: Bangkok-Nong Kai, Bangkok-Chiang Mai, and the high speed service linking the Suvanabhumi, Don Muang, and U-Tapao international airports.

The project has seven zones that cover 2,325 rai around Bang Sue district. Zone A covers 32 rai for a Smart Business Complex that will open for private sector bidding this year for its development.