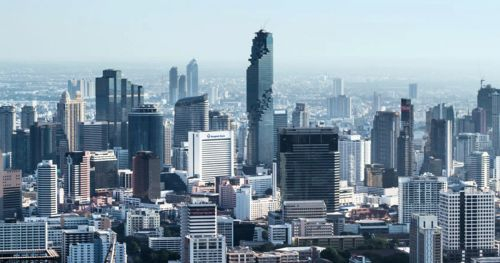 Investment activity across all property sectors in Thailand totalled Bt 19.2 billion for the first half of 2019.

Of this, more than half was from two transactions in Bangkok - the sale of the Sun Towers office complex and an 11-rai development site near BTS Mo Chit station, according to the Thailand Property Intelligence Centre by property consultancy JLL.

There were four transactions worth more than Bt1 billion each recorded in the first half of 2019. The largest transaction was Singha Estate Plc’s Bt-5.7 billion sale of Sun Towers, an office complex on Vibhavadi-Rangsit Road, to its sponsored REIT, the S Prime Growth Leasehold Real Estate Investment Trust.

Sino-Thai Engineering & Construction Plc (STECON) and its subsidiaries were the second largest investor in the first half with two transactions totalling more than Bt5 billion. In April, STECON purchased an 11-rai development site near BTS Mo Chit station from U City Plc for Bt4.3 billion that will be developed into an office complex. In June, one of the firm’s subsidiaries, ST Property & Logistics Co Ltd, acquired the Summer Hill community mall and Summer Hub office building next to BTS Phra Khanong station from Boutique Corporation Plc for Bt957 million.

Other construction firms investing in real estate include Saengfah Construction’s joint venture with AIRA Securities Plc and Sena Development Plc for the development of Spring Tower, an office tower near BTS Ratchathewi station, and Thai Obayashi’s 2017 acquisition of a development site next to BTS Nana station for a then-record-setting Bt2.6 million per square wah, where it is now building O-NES Tower, the firm’s first office building investment since the Nantawan Building near BTS Ratchadarmi station in 1991.”

The most expensive land transaction thus far in 2019 on a per square wah basis was Shangri-La Hotel Plc’s February acquisition of a 658 square wah site in Thonglor for Bt1.9 billion, or Bt2.86 million per square wah.

“The price per square wah for the site acquired by Shangri-La Hotel Plc is the highest per square wah price the market has seen for the development of a hotel, but did not break the all-time record high price of Bt3.1 million per square wah achieved by the 880-square-wah plot on Langsuan Road that JLL sold on behalf of the owner in 2018,” she said..

“High land prices and the new land and property tax regulations slated for enforcement in 2020 have motivated and will continue to motivate more owners of underutilised land or land with underperforming buildings in Bangkok’s prime locations to put their sites on the market this year. This will mean more opportunities for well-capitalised investors to acquire prime sites for their new development projects. We believe that visionary investors will still be able to achieve decent returns on investment in their future development projects despite rising land costs.”

JLL expects most of the upcoming major real investment activities in the remainder of 2019 to be land and commercial property investment transactions in Bangkok. The firm also anticipates investment activities to rise in the industrial/logistics sector, particularly in the Eastern Economic Corridor (EEC), as more manufacturers are relocating their China-based operations to Southeast Asia and the fast growth of e-commerce has fuelled demand for logistics real estate in Thailand.