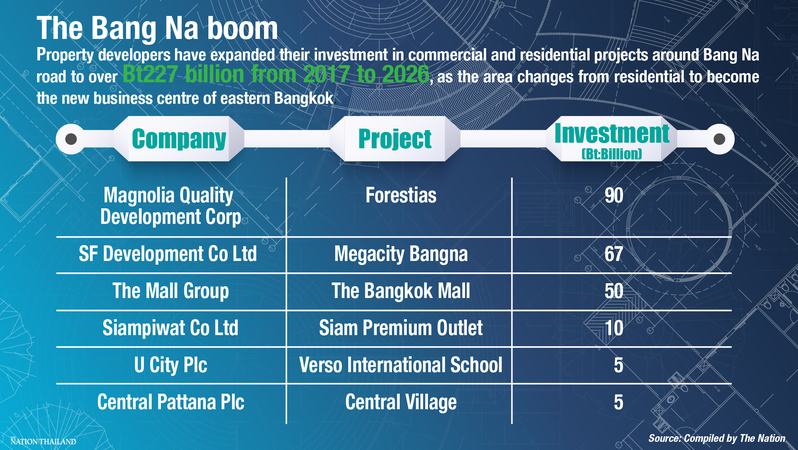 Property developers plan to invest Bt227 billion, from 2017 to 2026, in the eastern Bangkok district of Bangna in view of the area becoming a new business hub and a linkage between the capital city and the Eastern Economic Corridor (EEC).

Several real estate developers have expanded their portfolio to the location  since 2017 with the development of  commercial buildings (retail, office, and hospitality) and residential projects.

The Mall Group plans to invest more than Bt10 billion next year  in the development of Bangkok Mall at Bangna intersection.

SF Development Co Ltd  is building a mixed-use project, Megacity Bangna, on a 200-rai ploy next to Mega Banga. The Bt67-billion complex, scheduled for completion in 2017, comprises office and residential buildings, a hotel and a hospital.

BTS Group Holdings Plc plans to invest Bt5-billion in an international school at the site of its existing residential property, Thana City.

“We see demands for an international school in Bangna, following the Bangkok Metropolitan Administration's plan to develop a monorail system from Bangna to Suvarnbhumi that will connect with the BTS-Bangna station ,” BTS Group Holdings Plc’s chairman Keeree Kanjanapas said recently.

Number One Housing Development Co Ltd decided to launch a single-detached house project, Blue Lagoon, in the location because of the government's policy to develop a mass  transit route linking the area to the EEC, said managing director Sutham Suwannapasri.

“Land prices in Bangna have increased by seven to eight per cent in line with the rising demand for residential projects,” Sutham added.

“Property firms will have to launch both residential and commercial properties in the location as it develops into a new business district in the eastern part of Bangkok,”  said a real estate analyst.

Meanwhile, property agency CBRE said demand for warehouses has shown strong growth  in line with progress of  the e-commerce business, adding that Bangna-Trade road ( from km 18 to 24) is recommendable  for warehousing and logistics business, given its close proximity to the Eastern Economic Corridor.

DDproperty Property Market Outlook 2019 said the prices of townhouses in Bangna had risen nine per cent last year from 2017 amid growing demand, second only to the 10 per cent increase in Sathorn.