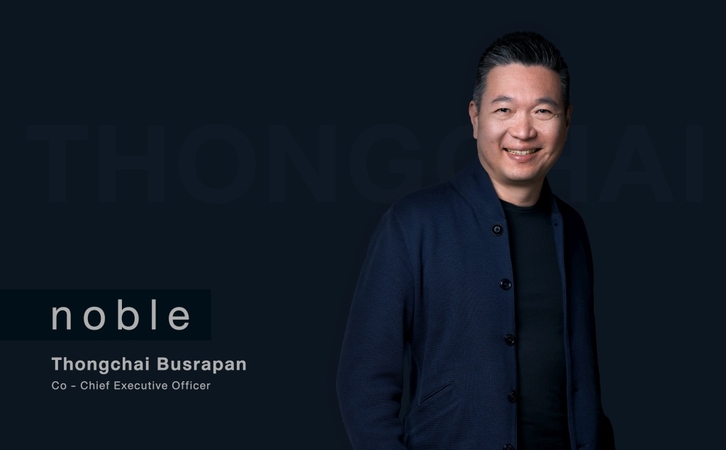 Citing high purchasing power among local and overseas customers, Noble is confident its revenue next year will exceed Bt11 billion with pre-sales of Bt16 billion. This would pave the way to becoming a top-5 property developer in Thailand over the next three years (2021-2023), said the company.

Chairman and co-chief executive officer Thongchai Busrapan said 2021 will be a year of growth and huge investment for Noble.

The Bt45.1-billion plan is the largest since the firm was established in 1991. Targeted revenue of Bt11 billion is 10 per cent up on this year's target of Bt10 billion, while the Bt16 billion pre-sales target is a jump of 146 per cent from Bt6.5 billion this year.

Four condominium projects, both high rise and low rise, are scheduled to launch in the first half of next year – the Bt5.4-billion Noble Form Thonglor, the Bt0.7-billion Nue Noble Centre Bangna, the Bt10.7-billion Embassy at Wireless, and the Bt1.9-billion Nue Condo at Don Mueang.

The other seven projects will be launched in the second half of the year, comprising condominiums, semi-detached houses, and townhouses, as part of Noble’s strategy to diversify its customer base locally and internationally.

The company has also partnered with U City Plc, an affiliate of BTS Group Holdings, to jointly develop Bangkok high-rise and low-rise condominiums, semi-detached houses, and townhouses on a 50:50 basis in Suksawat, Rat Burana, Khu Khot, and Rama IX roads worth a combined Bt23 billion.

The new projects are planned after the first joint venture project worth Bt2 billion on Ratchada-Lat Phrao Road has already sold more than 50 per cent of units. The four new projects are close to mass transit lines.

The company said it was continuing to focus on development of residential projects along mass transit lines.

Although the Covid-19 pandemic had seen some customers delay their purchases, Noble still enjoyed a 37 per cent share of Bangkok’s condominium market during the first nine months of 2020, Thongchai said.

The company has set a 2021 capital expenditure budget of more than Bt9 billion to support the investment plan.

The company also plans to issue 4:1 ratio warrants for existing shareholders to purchase ordinary Noble shares, to support business expansion in the next three years.

Moreover, Noble said it should be able to complete a par split process from 3 baht to 1 baht per share early next year, which would help increase trading liquidity for investors and also boost Noble’s eligibility for the SET100 Index.