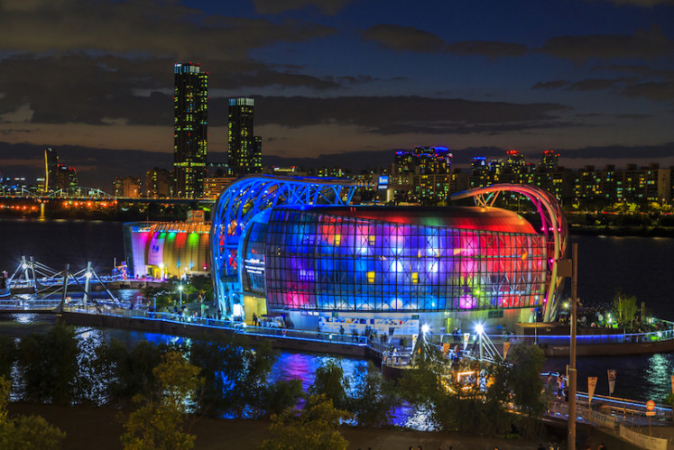 Summer means one thing beyond all else: vacation season.

Summer means one thing beyond all else: vacation season.

The good news for BTS fans around the world traveling to the Korean Peninsula to visit the septet’s homeland is that there are many great “BTS destinations” to hit.

Earlier this month, the Korea Tourism Organization announced the top 10 BTS-related locations fans want to visit, based on a poll conducted with 22,272 fans from 137 countries.

Here are the top 10 places to start checking off your list. Plan ahead for your BTS pilgrimage now.

A bus stop overlooking Hyangho Beach in the Jumunjin district of Gangneung, Gangwon Province, is a special place, accruing 21.8 percent of votes in the poll. 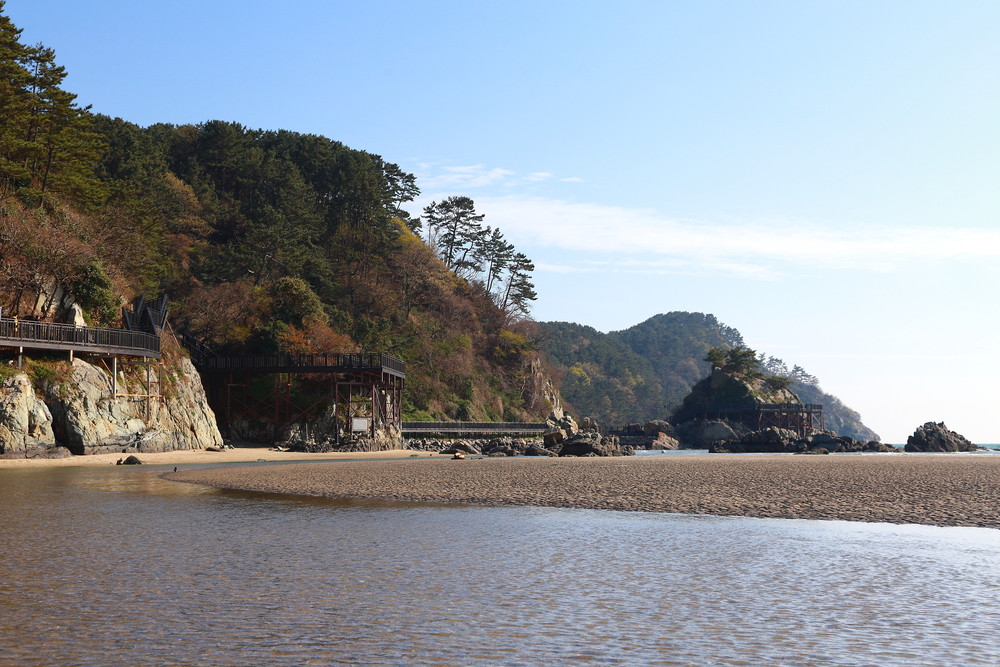 Dubbed “Bangtan Bus Stop,” BTS shot the album cover here for You Never Walk Alone in 2017. The romantic spot, which is not a real bus stop, was initially built just for the album. But after an influx of fans, the city set up the faux bus stop by the beach for fans and tourists to reenact the scene in their own photos.

Besides the bus stop, Jumunjin is a perfect place for summer vacation to swim, surf and enjoy the sandy beach. Hyangho beach is relatively clean and less crowded than other popular beaches around the East Sea.

Dadaepo Beach in the southern port city of Busan ranked second with 12.2 percent of votes.

Located in the hometown of Jimin and Jungkook, the serene beach is where Jimin walked around and filmed a vlog in January 2016 while he was visiting friends and family back home.

“I heard the sunset is really pretty here so I came. It’s really beautiful,” said Jimin in the video, showing viewers the scenic shore and sunset. He also made a wish, hoping the band would get whatever they wish and become famous. He wished for the band’s Army, the BTS fandom, to be healthy and happy.

Make sure to check for the sunset time when visiting the beach, and enjoy great seafood in the city.

The beautiful Metasequoia tree-lined road in South Jeolla Province, which earned 12.1 percent of votes, is where BTS leader RM visited in March this year. The wide beautiful path located in Damyang is known as one of the most scenic roads in Korea, thanks to a state-run project that planted Metasquoia trees, aka dawn redwoods, along the 8.5-kilometer stretch in the 1970s.

The street is especially popular during the summer season for its lush green leaves and in fall, when it turns red and yellow. RM was spotted enjoying his break riding a bicycle around the area, eating cotton candy and posing in the bamboo forest that the city is known for.

For BTS fans who want to stock up on merchandise of BT21, the collaborative character series created by BTS and Naver’s Line, check out the flagship store in Seoul’s bustling Itaewon district. Inside the three-story store, cute and charming BT21 characters -- designed after each of the band’s members -- are everywhere, with photo spots, cafes and BTS music on in the background. 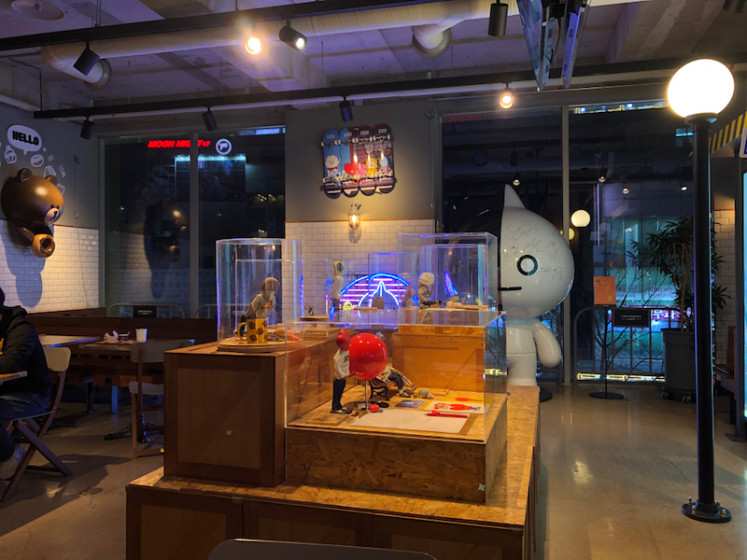 After shopping, check out the Itaewon district known for its cultural diversity, trendy restaurants, bars and shopping spots.

This closed train station in Yangju, Gyeonggi Province, is a popular spot for BTS fans wanting to visit the scene of the “Spring Day” music video.

In the clip, V walks into the middle of a snow-capped railway, leaning down to the ground to listen. Try planning a visit when it snows to get a close view of the quiet station just like in the music video. The rusty signboards and faded slate roof lend to a vintage retro ambience.

This must-go restaurant for BTS fans is located in Gangnam in southern Seoul, close to the dance studio where BTS would spend their days practicing. The bandmates came to eat almost every day for nearly two years beginning in their trainee days.

BTS memorabilia is now on display, coming from fans from all over the world visiting the eatery. Popular dishes here are bibimbap, stir-fried spicy pork and sausage stew, among others. On dish earned the nickname “Bangtan Bibimbap” because the band loved the option so much.

One of the tables is also marked with stickers for where the bandmates would sit.

From elementary school to middle school, high school and even university, the schools that the members of BTS attended across the country were selected with 4.5 percent of votes. The list is as follows. 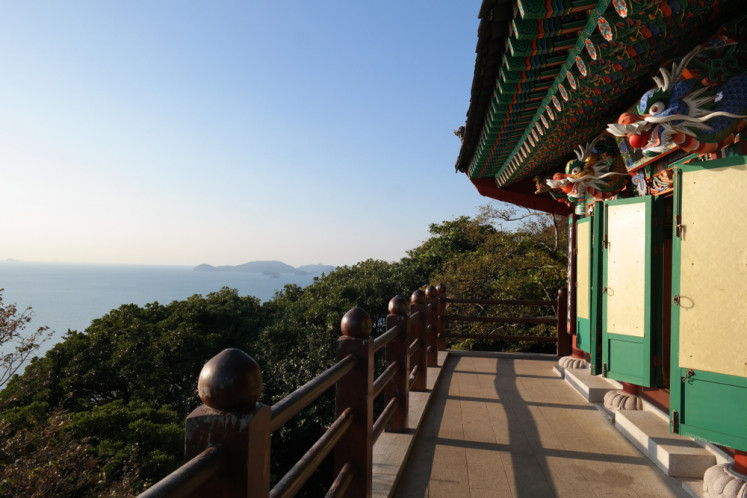 Visitors can walk around the historic hermitage located high the cliff that provides one of the best views of the South Sea. The temple offers the best sunrise and sunset views overlooking the panoramic ocean. RM, during his visit, wrote two wishes: “BTS going to Grammys” -- that came true -- and entering KAIST graduate school.

The pizza place in Gangnam is where BTS shot their concept photos for the Love Yourself: Her album in 2017.

The laundry-themed restaurant’s colorful interior and unique concept has attracted many other K-pop groups and celebrities for photo shoots as well. The eatery sells both slices and whole pizzas, including popular options of cheese, pepperoni, potato, mac and cheese and spinach bacon.

Inside the restaurant, visitors can see BTS pictures that were taken at the very location.

This popular local attraction by the Han River was featured in “BTS’ Life in Seoul,” a short promotional video of Seoul created by the capital city.

In the footage, which highlights some of the city’s hottest attractions, BTS enjoys a picnic with delivery foods like pizza and chicken at the park overlooking the river. “People in Seoul turn park into restaurant if there is something they want to eat,” the band says in the clip.

There are many activities for everyone, including cycling on the bike paths, jogging, camping and a famous water fountain show from the Banpo Bridge in the evening.