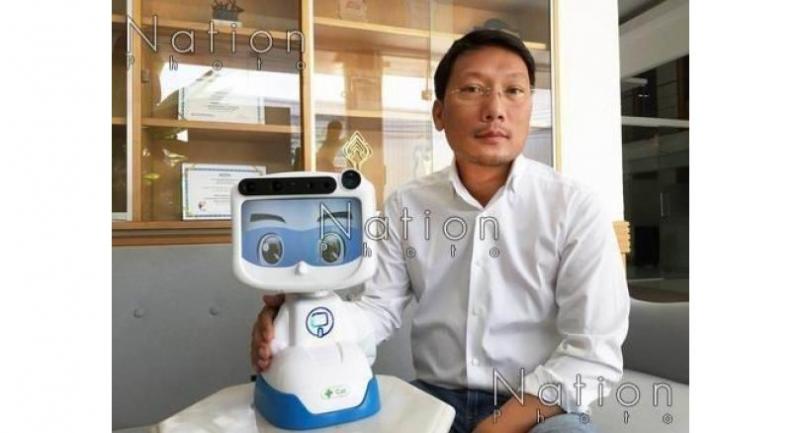 In 2014, Chalermpon’s CT Asia Robotics Co Ltd released its carer robot, called Dinsow, in Japan – the pioneering force in robotics technology. The robot is designed to take care of the elderly, who make up a growing proportion of Japan’s ageing |society.
Now, after success in Japan, the company plans to export updated versions of the robot to Germany and Singapore this year.
“It took three years of research and development to produce the robot after we established CT Asia Robotics Co Ltd in 2009,” said Chalermpon, owner/CEO of CT Asia Robotics, in an interview with The Nation recently. “In the 2011 launch year, the Dinsow robot was first developed to be used for advertising purposes at events. “Then our team continued to develop the next series with the goal of producing a robot to help take care of old people. We achieved success with this goal and began the exports to Japan in 2014. This success – especially in Japan, which is renowned for its robotics technology – inspired the team to keep improving our products to meet demand from both Thais and overseas customers.”
The company’s robots fulfil their care role by monitoring the elderly in their homes, and family members can communicate with the robots via an application. In the event of an accident involving the monitored person, the robot will send information to family members via the application, and such information will also be sent to a local hospital. Calls for an ambulance can be also be made, as all such contact information can be loaded into the memory of the robot’s computing power, Chalermpon said.
Chalermpon, 50, began in business in 1997 when he established CT Asia Co Ltd for call-centre operations. He got that started with his saving of just Bt300,000.
“I learned how to do things from being an employee in a software firm in the US. That experience inspired me to established my own business when I return to my hometown.”
From the Bt300,000 investment budget in 1997 – the fateful year that Thailand plunged into financial crisis - Chalermpon succeeded in boosting sales from Bt5 million that year to as much as Bt70 million last year.
Chalermpon’s interest in starting the business had also been fuelled by conversations he had with students who had won top honours in a competition for robotics technology.
“Most of them told me that could not do anything to pursue their ambitions in robotics upon graduation because the country did not then have a manufacturing capacity to produce robots,” he said.
“Their responses inspired me to established CT Asia Robotics Co Ltd in 2009 with an investment cost of Bt10 million, by recruiting the students who had won in the robot competition.”
He saw the need for robots that can take care of elderly people amid the trend in most countries for an ageing population. Since 2009, CT Asia Rototics Co Ltd has developed three new series of the Dinsow robot and will launch the fourth series this year. With the company’s success in Japan, it is engaged in negotiations for the exports to Germany and Singapore to start this year.
Chalermpon said that with the country moving forward under the Thailand 4.0 vision, more expertise in innovative and technology will be needed to drive the country’s growth, especially with home-grown technology. He said the government should not only support the development of innovative products with research and development budgets, but it should also become a buyer of the local products that result from this policy.
“For example, some private hospitals bought our robot to use in their patient wards, but state-owned hospitals have never bought them,” Chalermpon said. “That’s why many Thai producers who produce innovative products cannot improve their research and development programmes.”